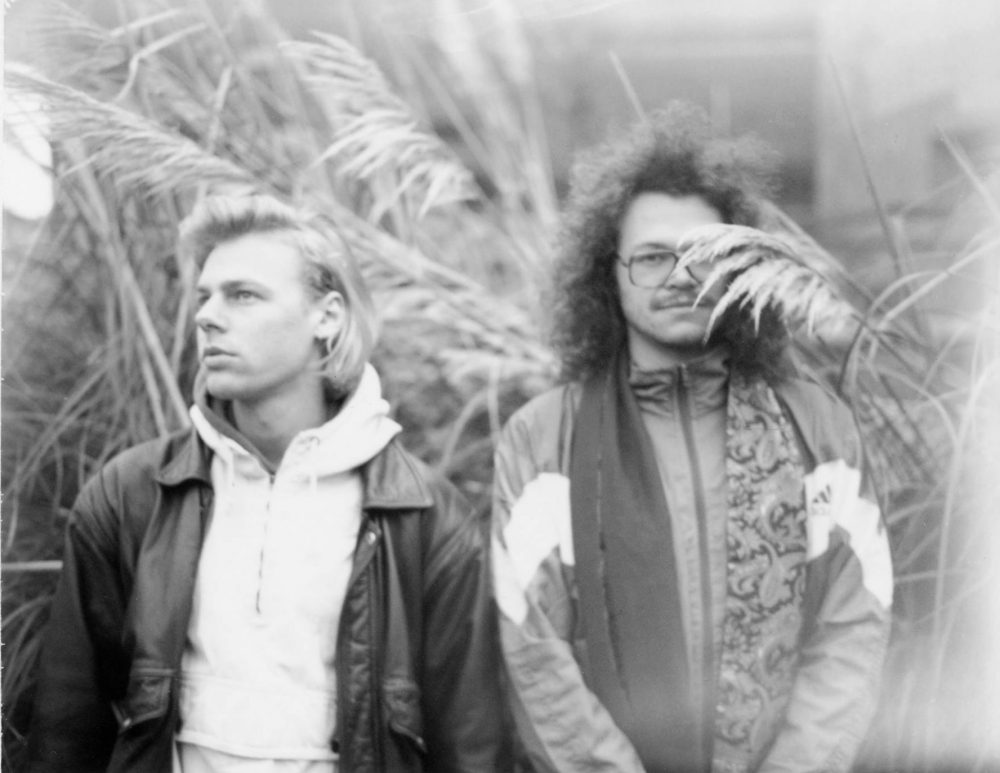 And…for the perfect soundtrack of those long summer nights…Here’s Amsterdam based duo BUNGALOW, with their finely lush synth-heavy number, called ‘Loving It’.

Hi BUNGALOW how are you today?

We’re good thank you! Just released a new single so we’re basking in the afterglow of that! Lots of sweet reactions so we’re happy.

What’s your new single ‘Loving It’ all about?

In short it’s about impossible love and all the frustrations and jealousy that come with it. Both parties feel the same and want to be together but are unsure whether to risk everything or to move on and try to forget about the other.

And how would you say it differs from your previous releases?

We’ve developed a lot since writing that first EP, both as songwriters/producers and as humans. We moved to a new studio, got some new gear. And also we started writing high rather than drunk, so that might’ve had an effect?

As multi-instrumentalists how does the songwriting process work in the band?

It’s never the same twice really. It’s an ever-changing and often quite chaotic process which involves the two of us in our synth-packed studio, constantly swapping places; one of us will be behind the laptop, the other behind a synth or a microphone.

How does Amsterdam and your surroundings influence your music?

Well, Amsterdam is a pretty small and relaxed place to live. We live very close to each other and our studio and everyone else we know lives less than 20 minute bike-ride away. That affects us as people so probably our music too.

We’ve been friends forever and obsessing over music is a big part of that friendship. We share a LOT of music with each-other but every now and then there’s a band or an artist that sticks out and becomes part of our fabric. Real game-changers. Some of those are Jai Paul who completely blew our minds with that leaked album in 2013 (and sometimes we listen to that again and it’s still fucking sick), Mura Masa who also is a big innovator in the way he combines hip-hop, electronic music and pop, bringing an underground flavour to millions of listeners without losing integrity. Another one is Phoenix which we listened to a lot growing up and was key for us in realising that electronic and band elements can be mixed. Also being a bit melancholy without sounding depressing is something we may have learned from them.

Which other bands would you recommend from the music scene back home?

We try not to think about that too much, at least not while writing. We just try to make the music that we’d want to listen to and have it come from an authentic place. If we were to analyse it I’d say somewhere in-between mainstream R&B-tinged pop and more alternative electronic music.

For those who haven’t seen you play live, what can people expect from a BUNGALOW live performances?

Well, we haven’t played a show for over 6 months because we were writing, but we have our first radio appearance next week so we’ll start rehearsing for that this weekend. We’ll let you know how it goes 😉

Finally, what does the rest of 2018 have in store for BUNGALOW?

A LOT of new music (and hopefully a bit of love)