Flash Fiktionâ€™s narratives may blur the boundaries of reality but their love of a good tune should keep their story true. 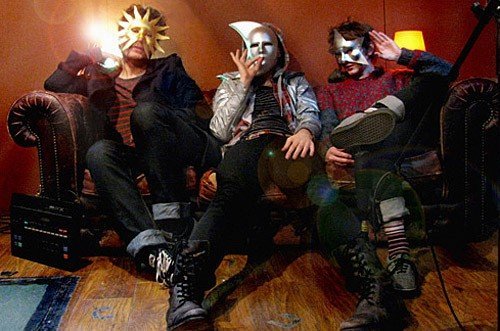 WHO ARE THE BAND MEMBERS AND WHAT DO EACH OF YOU DO IN THE BAND?
Matt voices/synth, Ollie guitar / voice, Dan drums / perucussion

WHAT KIND OF MUSIC DO YOU MAKE / PLAY?
Twisted raconteurial pop â€“ Hopefully new and exciting.

An ecclectic mix of everything we love. Flamboyant melodies with cuban beats dressed in electro look. Music that will make you jumpup and down.

WHERE ARE YOU FROM?
Essex, Southampton, Croatia. We definitely feel London is our home though and we’re part of the furniture.

Charlie Chaplinâ€™s garden between one of the largest derelict sink estates in the world and the south london artistic elite in camberwell and peckham.

HOW DID YOU GUYS GET TOGETHER AND WHEN?
Oli and Matt knew each other for years.Three of us met for the first time in our studio .

We realised we couldn’t stop talking for 5 hours and before you know it we’ve booked a rehearsal together and everything seemed just right and so true to ourselves.

We were finally able to be who we really are with no pretending or faking to be something we’re not.

WHO ARE YOUR INFLUENCES IN THE MUSIC INDUSTRY?
David Bowie still remains as one of our biggest influences because he went where no one has gone before or since.

We also really love MGMT, Yeasayer and The XX and many more.

WHAT HAS BEEN THE HARDEST PART OF BEING IN THE BAND FOR YOU?
Our obsession with perfection. We hate filler songs.

If something is not working we kill it in the beginning.

We don’t let the wounded animal suffer. We can’t stop untill evry little detail is the way we’ve heard it in our heads.

Sometimes it lasts for weeks and sometimes things happen in hours.

It can be emotionally draining but also very rewarding in the end.

Like killing off wounded animals and stopping their suffering â€“ if a track isnâ€™t going to work look into itâ€™s forelorn whimpering eyes, be a man annie and get your gun.

TELL US A BIT ABOUT YOUR EARLY DAYS AND HOW THEY DIFFER FROM NOW?
Everything happens quick in this band as we really do click on every level; either in writing or performing music, we know what each one of us thinks without the need of using words or a language.

It sounds surreal but this whole thing feels like deja vu. Every note is there because it had to be there.

Every word has got a purpose and a meaning. Everything we do has to be honest and wiped clean.

The music has taken on new forms, what was started a year or two ago has been honed to complete the sound in our heads.

WHAT WAS THE LAST GIG YOU PLAYED, WHAT DID YOU THINK OF IT ?
Last one we did was at White Heat with Is Tropical and Breton. We loved that place and the evening itself was fantastic.

We really enjoyed it.

WHATâ€™S THE MOST SUCCESSFUL THING YOU GUYS HAVE DONE TO DATE ?
Working with Lexxx was amazing, hearing our single being played on Radio 1 was amazing and the most important thing is working with people who believe in this as much as we do and that feels great.

WHO HAS HELPED YOU THE MOST GET TO WHERE YOU ARE TODAY ?
All the musical influences we grew up with.

WHATâ€™S COMING NEXT FOR THE BAND?
2nd single, gigging as much as possible and then the album.

IS IT HARD BEING A NEW BAND IN TODAYâ€™S INDUSTRY?
No, itâ€™s hard for the industry â€“ weâ€™re confident in what we create as artists and have no fear of anything except ghosts.

If the music you do is good there should be no fear or doubts.

Deep down inside you know if you’re are good enough but it takes a lot of courage to face it in case the answer is negative.

Some people postpone their hurt instead of being realistic and making an instant cut.

HOW IMPORTANT IS THE INTERNET AND SOCIAL NETWORK SITES TO THE SUCCESS OF YOUR BAND ?
www is everything nowdays.That’s what the name means: World Wide Web.

I know Prince wouldn’t agree but for a new band it is a place with a direct connection between a fan and a perfomer, between you and the audience.

It’s the virtual community where word gets around faster than in any publication.

Some people say itâ€™s too much information and ruins the mystique of the artist but I think it brings us all closer and much more personal.