Double A side “Fast Car / Slow Traffic” / “Andromeda” will be the next single release from Paul Weller’s overwhelmingly critically acclaimed hit album “Wake Up The Nation” which has been hailed as the best album of his career. 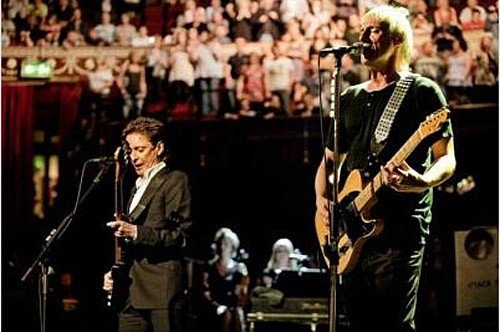 Released on September 13th, the single also reunites Paul with his former Jam bandmate Bruce Foxton on Fast Car / Slow Traffic – the first time the pair have teamed up since The Jam split in 1983.

Bruce also recently joined Paul onstage at the Albert Hall (on Paul’s birthday) to perform Fast Car and a few Jam songs which unsurprisingly brought the house down.

“It’s a real London tune. It’s a pretty full on. It was really interesting to hear Bruce playing on it. You can instantly tell it’s him.” Says Paul of the track.

“Wake Up The Nation” has also – quite rightly – been nominated for this years Mercury Music Prize which is announced on September 7th. The judges described the album as “an astonishing rush of energy, passion and invention’.

Paul is currently playing festivals around Europe and performs at the V Festival on August 21/22 and the Isle of Wight “Summer Madness” show on 29th August.

And will embark on tours of Australia, New Zealand and USA, plays 5 nights at the Dublin Olympia (16 – 20th Nov) and returns for a UK arena tour – dates are as follows: