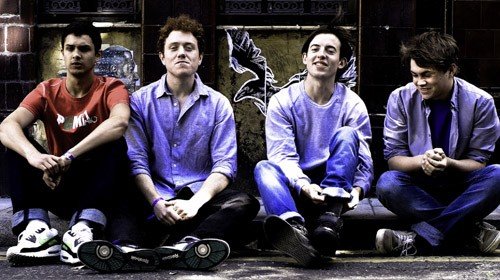 The band play an iTunes Festival headline slot on Sunday, 18th July @ Roundhouse.Â They are performing alongside Everything Everything and Stephen Fry.


Having finished recording their debut LP ‘I Had The Blues But I Shook Them Loose’ in February 2009, the band went straight back into the studio (The Church, Crouch End) days after they submitted the master for ‘I Had The Blues’, and started the initial recordings for this album.

Recorded in between touring over the past year and a half, a few early tracks were laid down at The Church and produced by Neill MacColl (guitarist Jamie’s Dad), but the rest was recorded in singer, Jack Steadman’s bedroom and produced by Jack himself.

‘Flaws’ is characterised by a delicate, heart-swelling beauty and lightness of touch throughout. Those that had BBC pegged merely as an indie band may need to re-think.

This more stripped down, acoustic sound – though markedly different from the majority of their debut – isn’t new for the band, as almost every single theyâ€™ve released since their earliest days has been accompanied by an acoustic b-side.

Jack describes his Dad playing him Harry Smith’s Anthology of American Folk Music for the first time as a â€œhuge momentâ€. Similarly, delving into his Dadâ€™s record collection introduced him to the likes of Neil Young, Joni Mitchell, John Martyn and Nick Drake.

Intricate, finger-picked guitar lines and ethereal melodies pull at the heart strings on new songs such as My God, the startlingly pretty Leaving Blues and title track Flaws (a duet with Lucy Rose).

On other tracks â€“ ‘Rinse Me Down’ and ‘Many Ways’ – skittering drum rhythms and distant banjo lines drift in, but in the main, itâ€™s a naked intimacy that makes these songs dazzle.

The albumâ€™s final track, ‘Swansea’, is perhaps the most exciting in terms of where BBC will take their sound next. All the music for ‘Swansea’ was written by Jack, but uses some of the lyrics from a Joanna Newsom track of the same name.