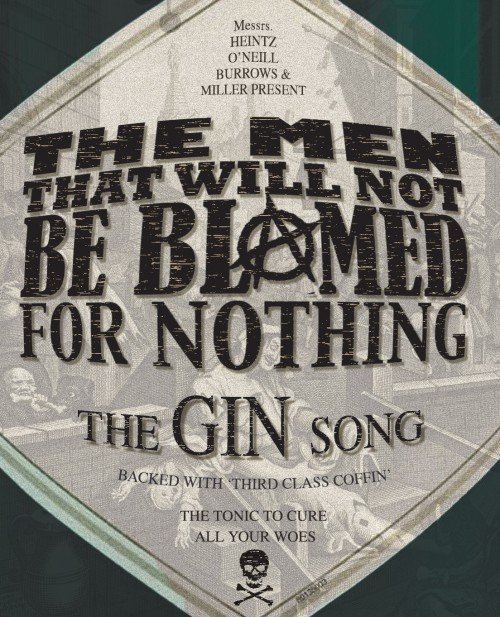 The Men That Will Not Be Blamed For Nothing are the UK’s biggest Steampunk band seemingly and with their latest single ‘The Gin Song / Third Class Coffin’, they’re definitely proving that they’re not just a gimmicky joke band, but one with a tongue-in-cheek message.

The double a-side starts with ‘The Gin Song’, a modern day urban shanty that opens with ‘it’s cleaner than water it’s cheaper than porter, it’s gin’ crescendoing into a chorus that ends with ‘gin is the tonic to cure all your woes’. This is a working class anthem of melancholy and sorrow, executed with humour and alt rock Steampunk finesse.

‘3rd Class Coffin’ is a complete change of pace, a calm and steady start erupts into a cacophony of noise with ‘I’m a third class citizen even when I’m dead’. There’s a more serious undertone here and the band prove they’re more than they’re Steampunk roots.

Hopefully this strong double a-side is just the appetiser for what’s to come. If you’re new to Steampunk then The Men That Will Not Be Blamed For Nothing may well become your new favourite stalwarts.