You Me At Six return to Ireland to play two end of year dates in Belfast and Dublin when they play Ulster Hall on Saturday 18th and the Olympia Theatre on Sunday 19th. 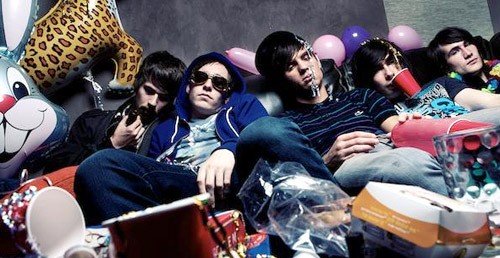 You Me At Six began as most bands do: friends coming together and playing music to pass the time.

United by their love of bands such as Fall Out Boy and Blink-182, the Surrey based quintet started out just like any other, practicing in their familiesâ€™ garages and playing shows to their friends. Slowly building a fan base across the UK, thanks in part to social networking site MySpace, You Me At Six began touring the country, letting their fan base grow organically.

By the summer of 2007 and with over a million plays on their MySpace, You Me At Six played a support slot to a sold out crowd at Londonâ€™s Underworld and it was clear their peers as well as industry types were taking notice.

Kerrang! Magazine ran an Introducing feature on the band soon after marking the beginning of a very busy year for Josh, Matt, Chris, Max and Dan.

Since the autumn of 2007, itâ€™s been a whirlwind for You Me At Sixâ€¦ Two Kerrang! Nominations, tours supporting everyone from Fightstar to New Found Glory, The Audition, Angels & Airwaves and Fall Out Boy as well as numerous headline tours and festival appearances came their way.

They also signed an album deal with Slam Dunk Records and released their debut album, Take Off Your Colours, which went in at number 25.
www.youmeatsix.com
You Me At Six
Saturday 18th: Ulster Hall, Belfast – UKÂ£22
Sunday 19th: Olympia Theatre, Dublin – â‚¬25
All ticket priced are inclusive of booking fee and on sale now

And direct from the Ulster Hall Box Office on
Phone: 02890 334455
Online: www.belfastcity.gov.uk/ulsterhall