Sexy top girl band The Saturdays features on the front cover of the February issue of FHM magazine. Mollie, Frankie, Vanessa, Rochelle and Una admit they are very pleased with their new image.

‘Never in my wildest dreams did I think Iâ€™d be on the cover of FHM,’ said 20-year-old Essex-born Rochelle Wiseman. ‘And neither did my nan! I never thought anyone would want to see us prancing around in our underwear, but apparently they do.’

Last year was the band’s breakthrough year and in the run-up to the release of their second album, Wordshaker, theyâ€™ve been working non-stop. 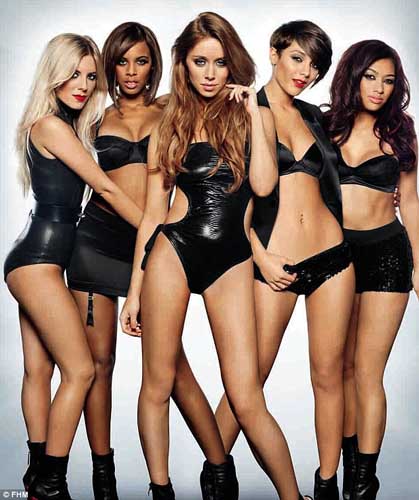 ‘I miss being able to plan ahead and be spontaneous,’ Frankie told FHM. ‘Iâ€™ve got friends at uni and two of my friends have just moved to Berlin. ‘Iâ€™d like to be able to go and have a mad weekend in Germany or go and party at university. The chances of having a full weekend off are pretty slim.’

In the past year, the girls have found some things have changed in their lives. 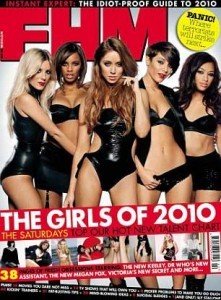 ‘I still do everything that I did before â€“ I still go shopping and go to the cinema,’ said Una. ‘But sometimes when youâ€™re out and you do get recognised, you feel a bit intimidated, especially if thereâ€™s groups.

‘My New Yearâ€™s resolution is to not get papped while Iâ€™m p*ssed, like I did on my birthday. Everyone does it, but we just have to be a bit careful now.’