NASA and U2 released a commemorative video highlighting a year’s worth of collaboration in space and on the Irish rock band’s 360 Degree tour.

U2 approached NASA in 2009 with an idea to include a dialogue between the band and the crew of the International Space Station during U2’s world tour.

The astronauts of Expedition 20, the crew then living aboard the space station, agreed to participate and spoke with U2 several times before recording a video segment the band incorporated into its concerts. 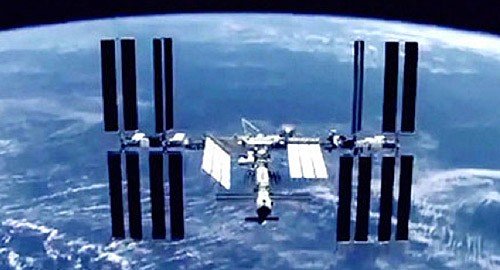 “Working with U2 is atypical for NASA,” said Bill Gerstenmaier, NASA’s associate administrator for Space Operations.

“By combining their world tour with the space station’s out-of-this-world mission, more people — and different people than our normal target audiences — learned about the International Space Station and the important work we are doing in orbit.”

Speaking onstage in Houston last year, Bono said, “These are the very best people in the world — dedicated to figuring how our little planet exists in this cosmos we call home.”

De Winne and Romanenko attended U2’s performance in Moscow on Wednesday and met with the band before the show.

U2 created the video and presented it to NASA to document the collaboration between the band and the space agency.
www.u2.com
www.nasa.gov/station
www.nasa.gov