Jedward’s spokesperson said: ‘Following a fall during a performance at T4 On The Beach this Sunday we can confirm that Edward has torn his knee ligaments and will require surgery on his injuries.’ 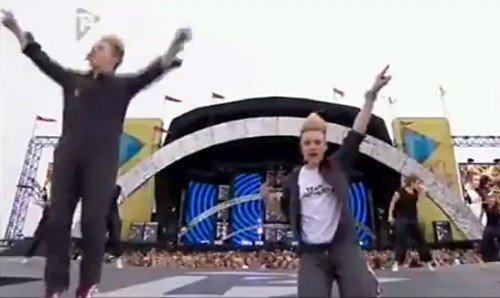 Jedwardâ€™s manager Louis Walsh said he was concerned for the singer’s health, but couldnâ€™t confirm how serious the injury was.

He told the Daily Mail: â€˜It was live TV and thatâ€™s what can happen on live TV. They were excited to be performing in front of 70,000 people and we hope heâ€™s alright.’

After the fall, Edward clutched his leg in agony and struggled to get up as he tried to continue the routine.
Read more: