To millions, Ricky Tomlinson, in the guise of TV’s Jim Royle, is the Sultan of Sloth. But behind the extraordinary success of the star of The Royle Family, lies a story of poverty, prison and banjo-playing!
Thirty years ago, Ricky Tomlinson languished in a prison cell in solitary confinement, a radical and uncompromising trade unionist imprisoned for his political beliefs. The story of Ricky Tomlinson is really the story of two men. One, a natural performer with a talent to amuse: teller of corny jokes, seasoned actor and banjo virtuoso. 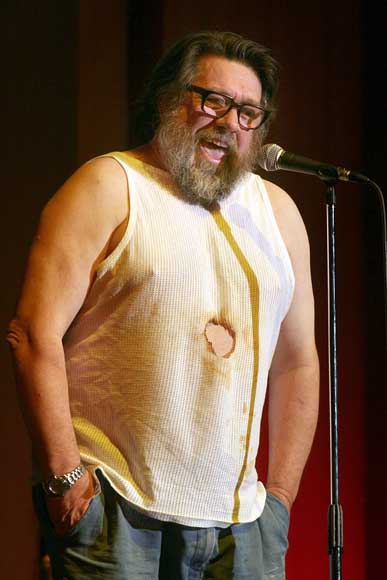 The other, an unrepentant working-class warrior, a radical Socialist who has staunchly refused to compromise his old-fashioned ideology. Ricky Tomlinson was born in Liverpool in 1939, during the first month of the Second World War. His childhood was hard: “I’m not getting the violin out,” he told an interviewer, “but there were six of us in a two-bedroom house”.

The son of a baker, early hopes of a career as a footballer (he was offered, but turned down, a trial for Scunthorpe United) took second place to playing banjo in Liverpool’s pubs and clubs. He eventually moved to Wrexham after meeting and marrying a local woman and he found work digging holes for a construction company building the A483 Wrexham bypass and to which he refers in his autobiography, Ricky.

Then came his involvement in the 1972 builders’ strike during which he organised flying pickets and refused to testify in court against his fellow strikers. This earned him a two-year prison sentence for conspiracy which he has said he will challenge in court. Ricky Tomlinson served his time in 14 prisons, mostly in solitary confinement because, as he puts it: “I wouldn’t wear any clothes.”
He developed a passion for classical music and, through one prison governor, who was an ex-bricklayer, discovered socialist theory. “He gave me a copy of The Ragged Trousered Philanthropist,” says Tomlinson, “which I have read and sent copies of all over the world.”

On his release from prison in 1975, Ricky Tomlinson found himself blacklisted from the building trade so he set himself up as an entertainer, theatrical agent and pub landlord, to varied success. But his life was transformed in 1980 when the director Alan Bleasdale, who had seen Tomlinson’s stage routine a year earlier, cast him in a minor role in the acclaimed series Boys From The Blackstuff. With his grizzled face and world-wise manner, he was a natural for parts in Jim Allen’s United Kingdom, Ken Loach’s bleak Riff Raff and, most notably, as the bolshie trade unionist Bobby Grant in Brookside.

His transformation to national superstar, though, came in 1998 when, reunited with his Brookside screen wife Sue Johnston, he starred as grumpy Dad in The Royle Family.
RICKY TOMLINSON
The Waterfront Hall, Belfast: Saturday 6th September
Tickets: Â£30 available from
The Waterfront Box Office: 028 90 334455
waterfront.co.uk