Libby Jewson will lead the naked ride through Hyde Park

Horse-riding women are being urged to get their kecks off on Monday 19 May and join a mass Lady Godiva naked ride in Hyde Park. The ride takes place at 11 a.m. and is in aid of Maggie’s, a cancer support charity.

It’s the mad-cap idea of young film director Vicky Jewson who will be donating a Godiva (fiver) to Maggie’s Centre Oxford for each rider who dares to bare all. 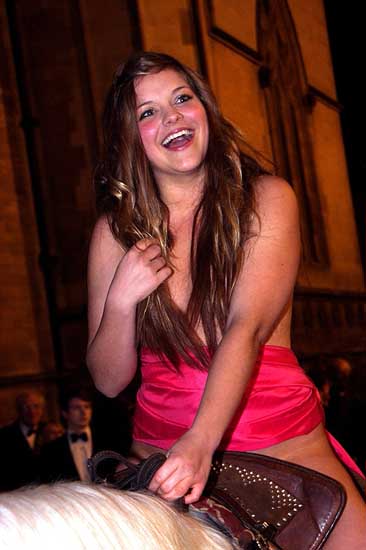 Vicky said: This will be a fantastic opportunity for women all over Britain to do something fun and outrageous in aid of charity.

Maggie’s Centre is a place that any one affected by cancer can turn to for help and support and having naked Godiva’s riding through London is a great way to raise awareness; but also to celebrate the release of Lady Godiva on DVD.

The naked ride will be led by Libby Jewson, who plays Penny in the film Lady Godiva. Although Libby didn’t get naked in the film, she did at the premiere in January, when she rode naked on horseback through Oxford to bring a bit of saucy fun to the event. She is now reprising the role to encourage as many people as possible to join Libby and ride as Lady Godiva would have in 1057.

Vicky’s film Lady Godiva premiered on 22 January and her DVD will be hitting Asda, Woolworth’s and Sainsbury stores on Monday 19 May 2008.
twitter.com/lady_godiva