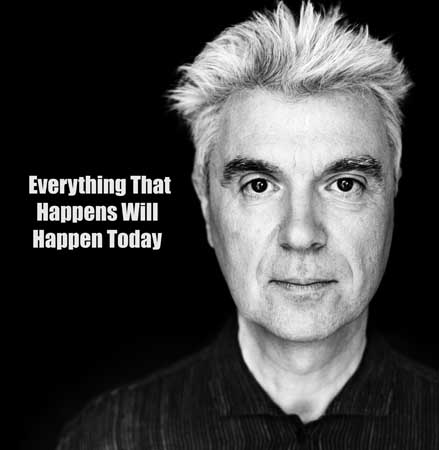 Raglane Entertainment proudly presents David Byrne on Tour, performing the songs of David Byrne and Brian Eno. The Talking Heads frontman will play two Irish shows: The National Concert Hall, Dublin on Monday April 6th, 2009 and The Waterfront Hall, Belfast on Tuesday April 7th, 2009.Byrne and Eno paired up for their first record together as co-writers in 1981 with the release of My Life in the Bush of Ghosts. August of this year saw the release of a brand new collaboration Everything That Happens Will Happen Today, the culmination of a yearâ€™s worth of writing, recording and much travel between New York and London. 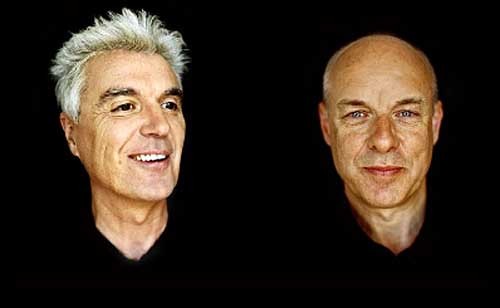 DAVID BYRNE on Tour
the songs of david byrne and brian eno
Tuesday April 7th, 2009, Waterfront Hall, Belfast
On-sale from Waterfront Hall Box Office
Credit Card Bookings 028 90334455
Book online @ waterfront.co.uk / wonderlandpromotions.co.uk
Please note Brian Eno will not be performing at these shows
Tickets for the Waterfront Hall show are Â£45 and Â£40 available from the Waterfront Box Office Tel 028 90334455.
This is a fully seated concert.
everythingthathappens.com
David Byrne and Brian Eno have paired up for their first record together as co-writers since the highly influential and critically acclaimed 1981 release My Life in the Bush of Ghosts. Self-released August 18, Everything That Happens Will Happen Today is the culmination of a yearâ€™s worth of writing, recording, and travel between New York and London. The album is now available as a stream and digital download for purchase exclusively through everythingthathappens.com. Other formats will follow including enhanced CD with download and deluxe package CD with download featuring artwork by Stefan Sagmeister.

Everything That Happensâ€¦ was conceptualised during a visit to Brian Enoâ€™s studio after the two reconnected upon Nonesuch Recordsâ€™ re-release of Bush of Ghosts. Byrne explains, â€œI recall Brian mentioning that he had a lot of largely instrumental tracks heâ€™d accumulated, and since, in his words, he â€˜hates writing words,â€™ I suggested I have a go at writing some words, and tunes over a few of them, and we see what happens.â€ Thus the two began exchanging vocal and instrumental tracks, and the transatlantic collaboration began.

Everything That Happensâ€¦ is less a collage than the duoâ€™s previous effort of some 27 years ago and more a collection of songs. Whereas Bush of Ghosts incorporated the contributions of 11 additional musicians along with a variety of â€œfoundâ€ voicesâ€”ranging from radio talk-show hosts to Lebanese mountain singersâ€”this latest recording almost exclusively features Byrneâ€™s lyrics and voice alongside Enoâ€™s various electronic tracks. â€œWhen we started this work, we started to think we were making something like electronic gospel: a music where singing was the central event, but whose sonic landscapes were not the type normally associated with that way of singing,â€ says Eno. â€œThis thought tapped into my long love affair with gospel music, which, curiously, was inadvertently initiated by David and the Talking Heads.â€

With a Byrne tour â€œDavid Byrne, Songs of David Byrne and Brian Enoâ€ scheduled in support of the release of Everything That Happens from the fall of `08 through early `09 in the U.S. Australasia in early 09 and Europe in March 09, the focus will be on these new songs as well as Byrneâ€™s previous collaborations with Eno including some Talking Heads albums (many of which were produced by Eno). â€œThe live shows will maybe try to draw a line linking this new material with what we did 30 years ago,â€ explains Byrne, â€œa little bit anyway.â€

Ambient pioneer, glam-rocker, hit producer, multi-media artist, technological innovator, worldbeat proponent and self-described non-musician, Brian Eno started his career as a founding member of Roxy Music. Leaving the band in 1973, he began his solo career with the album Here Come The Warm Jets, followed by a string of critically acclaimed records including Music For Airports. Collaborators include John Cale, Nico, Robert Fripp and David Bowie. As a producer, credits include work with Geoffrey Oreyama, U2â€™s The Joshua Tree, Unforgettable Fire, Zooropa and Achtung Baby, David Bowieâ€™s Outside as well as Coldplayâ€™s latest album Viva La Vida Or Death And All His Friends.

Known as the force behind Talking Heads and later as creator of the highly-regarded record-label Luaka Bop, David Byrne also works as a photographer, film director, author, and solo artist; he has published and exhibited visual art for more than a decade. Recent works include the release of Grown Backwards, Byrneâ€™s debut for Nonesuch Records, EEEIâ€”Envisioning Emotional Epistemological Information (Steidl Publishing & Pace/McGill Gallery), the Lead Us Not into Temptation CD from the film Young Adam, the Talking Heads box set, the Independent Publisher Book Award Gold Medal-winning Arboretum (published by McSweeneyâ€™s), the Live From Austin, TX CD/DVD, the Knee Plays CD from Robert Wilsonâ€™s 1984 stage piece the CIVIL warS, and Playing the Building, an installation at the Battery Maritime Building in New York City.
David Byrne & Brian Eno
Everything That Happens Will Happen Today