Sassy singer/songwriter Zarif is bringing out something new and fresh, with the release of her album â€˜Box of Secretsâ€™. 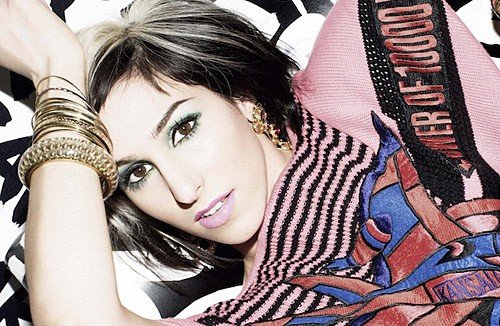 The soulful singer is playing by her own rules having set up her own â€˜Bright Pink Recordsâ€™ label. Zarif is now set to challenge the charts with the release of this sharp slice of soul, jazz and pop.

She explains, â€œI decided to set up my own label. Musically I can do whatever I want now and can have more input in every aspectâ€¦ itâ€™s much more me.â€

WHAT KIND OF MUSIC DO YOU MAKE / PLAY ?
I do soulful summery pop, but it’s also very eclectic, my influences are everyone from Stevie Wonder to Bjork to Led Zepellin, and I try and get a bit of all my influences on there. For me the emphasis is on classic songs, but at the end of the day it’s still pop.

Pop has become such a dirty word but I want to get back to the days when pop just meant popular, I think you can have big choruses and it still be good music.

WHERE ARE YOU FROM ?
I’m from North London, originally Harrow.

HOW DID YOU START MAKING MUSIC AND WHEN?
I’ve always been writing songs, I don’t know how I started but for as long as I can remember I’ve always been playing around on the piano and writing melodies.

The first proper song I wrote was for a Blue Peter song competition when I was about 7, I think it was about being Green or something!

WHO ARE YOUR INFLUENCES IN THE MUSIC INDUSTRY ?
I have so many, my top 3 of all time are Stevie, Michael Jackson and Prince. I’m also really into people’s voices, and love Eva Cassidy, Minnie Ripperton, Aretha. I also love Outkast and Jamie Lidell.

WHAT HAS BEEN THE HARDEST PART OF MAKING MUSIC FOR YOU ?
Probably just keeping on going. It’s hard when it’s your own music so you’re nervous to get it out there, but you have to be your own cheerleader and constantly try and get the music heard and stay enthusiastic. But on the whole it’s been a very fun ride so far.

TELL US A BIT ABOUT YOUR EARLY DAYS AND HOW THEY DIFFER FROM NOW ?
Having more time on my hands ha ha! I’m so busy at the moment that it’s music music music, but I’m so lucky to be doing this I don’t mind being a workaholic for a bit! Also I’m surrounded by my friends, like in my band, so it’s still fun.

WHAT WAS THE LAST GIG YOU PLAYED, WHAT DID YOU THINK OF IT ?
The last gig was the album launch party in Notting Hill Arts Club (London), and it was brilliant! We played 8 songs from the album, some of which I’d never played live before so that was cool. And it was packed!

WHATâ€™S THE MOST SUCCESSFUL THING YOU HAVE DONE TO DATE ?
Probably the Beyonce tour. It was an amazing experience and the biggest tour I’ve ever done. Plus Beyonce is one of my idols, in fact I already had tickets to go and see the show with my backing singers before I found out I was supporting, so that was a funny conversation when I told them “Erm… I can’t go…”!

WHO HAS HELPED YOU THE MOST GET TO WHERE YOU ARE TODAY ?
It would have to be my friends and my band, as they keep me motivated and enthusiastic, and have come and played the tiniest venues all around the country and are always supportive.

WHATâ€™S COMING NEXT FOR YOU?
The album is out on Monday, and that’s what I’ve been working towards, so I can’t waitfor it to finally be out! After that, who knows, world domination?

IS IT HARD BEING A NEW ARTIST IN TODAYâ€™S INDUSTRY ?
I think it is hard, as there are so many people coming out and people are less willing to take risks, as everyone seems to be obsessed with getting in the top 10 and if not then you’ve had it I think in the past it was more about growing and having the time to develop your sound.

Having said that there are far more opportunities to do things by yourself now, with MySpace and getting music onto the net. I’m doing everything through my own label I set up this year, so hopefully I can have the best of both worlds.

HOW IMPORTANT IS THE INTERNET AND SOCIAL NETWORK SITES TO THE SUCCESS OF YOURSELF?
So important! When I started out, it helped hugely in getting gigs and finding people to work with and write music with.

Before social networking you’d have to find individuals to target and get people a demo CD, whereas now your music can be there for everyone to hear at the click of the button, so you can reach people directly.

More recently it’s helped me with promoting everything, as you can just post a message on Twitter or Facebook and everyone instantly knows what new song is out or where to buy the album.

WHO WOULD YOU MOST LIKE TO COLLABORATE WITH IN THE INDUSTRY ?
I always say Prince- maybe one day he’ll actually read an interview and take me up on it!

WHO WOULD YOU MOST LIKE TO COLLABORATE WITH IN IRELAND OR NORTHERN IRELAND AND WHY?
I know this is a bit old school but I’ve always loved Sinead O’Connor. I love her voice and her whole attitude. But I don’t know if she’s still doing stuff? Sinead, call me!