After self-releasing two very limited edition singles last year, Young Rebel Set return with an EP full of new material which showcases the depth to the band’s songwriting canon & demonstrates why they’re so hotly tipped for this year.

The self-produced EP is set for release through the band’s own label – Our Broadcast – and ‘Won’t Get Up Again’ is mixed by Mike Crossey (Arctic Monkeys, The Coral). 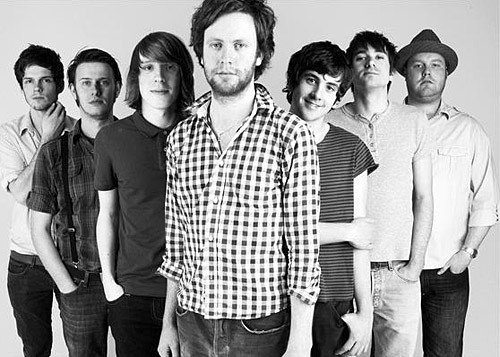 Young Rebel Set are currently on a mammoth UK tour which sees them take in 24 venues over March & April that will steadily build on the buzz that has been spilling over from the North East into the rest of the UK.

Breaking out of their own native scene where they’ve built a huge following, Young Rebel Set’s songs are the sound of disenchanted, literate, working class young men in Northern Britain in 2010, looking for a means of escape through the music they love.

Fronted by Matty Chipchase, all seven members of the band have been friends since school and include two sets of brothers, further cementing the gang spirit.

‘Wont Get Up Again’ is another outstanding anthem from Young Rebel Set, blending the band’s love of folk and punk into a rousing tale of stumbling down the wrong path.

Their love for Dylan can be seen on ‘Bagatelle’ which highlights the more delicate side of Chipchase’s vocals and the band’s subtle musicianship. And with ‘Rosie’ they tell the story of a woman trying to change her wayward ways.

Matty’s strong accent is as ever present, and these songs could come from nowhere else but the North East of England, adding to the band’s collective charm and individuality.
www.myspace.com/youngrebelset