By Keith Bailie
ACCLAIMED British indie pop act Young Knives will take to the stage at the Spring & Airbrake on March 24.
Young Knives are a muscular clatter of pulsing guitars with brotherly vocals providing the backbone to a rich throng of giddy, excited ideas and wry lyrical themes. 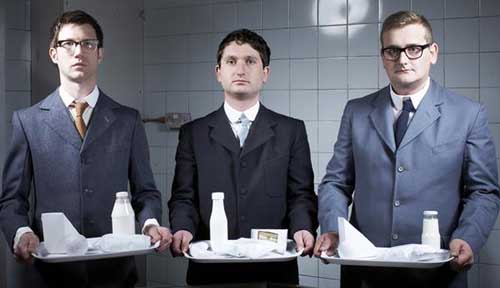 It’s been an exciting couple of years for this respectably dressed pop band. Based upon an inimitably tight, three man unit, comprising brothers Henry and Thomas ‘House Of Lords’ Dartnall and school-friend Oliver Askew, who the brothers met in Ashby De La Zouche near Loughborough.
It was their new material in winter 2005 that made audiences and critics sit up and take notice. The abrasive guitars and stop-start rhythms were merging with new melody-drenched choruses that stuck in heads and shifted feet.
The band then linked up with Gang of Four member Andy Gill to record their first full album Voices of Animals and Men which was released by Transgressive.
Henry Dartnall said: â€œI just remember how exciting it was to do it (make the album with Gill), obviously it being our first proper experience in the studio with a seasoned producer, and how much we learnt a lot.
â€œWe thought properly about songwriting and song structure. Emotionally, it was a great awakening as a band. He is like your guiding, wise uncle”.
The album reached silver record status, spawning several hit singles in the form of The Decision, Here Comes The Rumour Mill, She’s Attracted To, and Weekends & Bleak Days (Hot Summer).
The Young Knives received a nomination for the highly prestigious Mercury Music Prize and toured to great acclaim in America and Europe.
They are currently working on new material at their new private studio in Scotland called the Castle of Doom.
Tickets for the gig are Â£11.50 and they are available behind the bar at Katy Dalyâ€™s and from all Ticketmaster outlets.