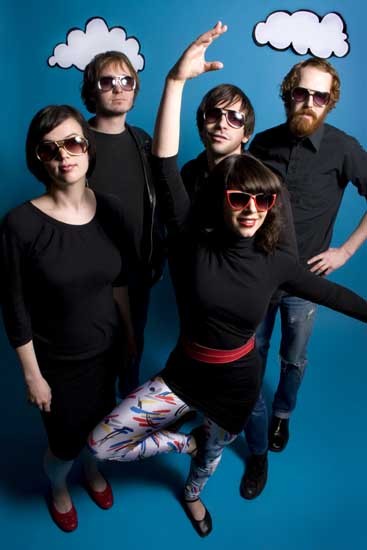 Vancouverâ€™s resident dance-punk savants You Say Party! We Say Die! are a catalyst on the edge of a scene brimming towards explosion; hybridized, mechanized, philosophizing machines that have learned self-awareness and found their soul. Theyâ€™re among us, androids slowly infiltrating all of our most trusted institutions. Today the dance-punk scene. Tomorrow the Capital. Start hoarding supplies.

Self-styled pioneers and genre-warriors alike are noticing that this is a band taking on the world on their own terms. But their relationship might have ended with late night skate park odysseys or the formation of a browbeating bicycle gang had Stephen Oâ€™Shea (bass) not overheard Becky Ninkovic (vocals) singing to herself and asked her to join the band. Time and circumstance have since streamlined You Say Party! We Say Die! into its reigning, laser guided incarnation, an anthemic, stomping, post-everything insistence that. If you are doing what you really love then life feels like a party. Donâ€™t stop. Do it â€˜till it kills you.

You Say Party! We Say Die! first inaugurated critics and indie fans alike with the release of their lauded April, 2004 EP Dansk Wad (â€œDance Squadâ€), and have since earned respect and accolades throughout the music world by tirelessly promoting their music on two cross-Canada tours, two full North American tours and two UK/European tours. Theirs is a brand of dance punk that theyâ€™ve earned the right to definitively call their own.

This perpetually dance-inducing live act is now improving the record collections of fans everywhere with the release of their debut and first full length for Vancouver-based Sound Document Recordings, Hit the Floor! (2005). The fevered sounds of a band harnessing a sceneâ€™s frenetic energy and budding influence, Hit the Floor! is a spastic, clever collision of synths, beats and melody, nostalgic for the sceneâ€™s best-respected acts while blazing its own richly diverse path. Released in September of 2005 in Canada and October 2005 in the U.S., itâ€™s an album that explodes with surprising force while suggesting that the apex of the bandâ€™s potential is yet far off.

Hit the Floor! has since gone international; it was released in Australia in August of 2006 on Shock Records, in September of 2006 in Europe on Sound Document, and December of 2006 in Japan on Get Me? Records.

In June of 2006, You Say Party! We Say Die! released a European 7â€ of their furious working class hymn â€œThe Gapâ€ on Cheesedream Records, followed in August of 2006 by a 7â€ double A-side of â€œYou Did It!â€ and â€œLove in the New Milleniumâ€ on UK label Sink & Stove Records.

Despite their already remarkable success, You Say Party! We Say Die! are far from finished; they have the world squarely in their sights, counting among their goals a sophomore effort as stunning as their debut, music videos, tours to Japan, China, Australia and Brazil, and being able to pay their rents in the process.
YOU SAY PARTY! WE SAY DIE! are:
Becky Ninkovic: Lead Vocals
Stephen Oâ€™Shea: Bass Guitar
Krista Loewen: Keyboards
Devon Clifford: Drums
Derek Adam: Guitar