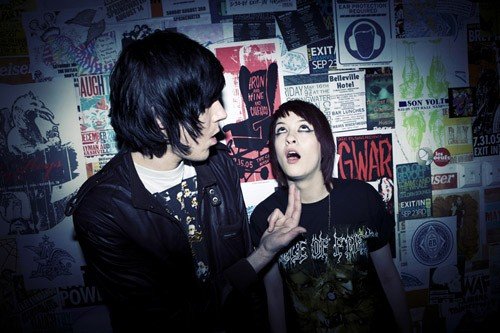 The album is a collection of 10 tracks (some re-worked and some brand new) that Elle & Jay felt made sense together and are a good representation of their collaborative creative efforts. The album was entirely produced and mixed by YLHCSD and mastered at The Exchange in London by Nilesh Patel (Daft Punk / Justice / Mr.Oizo / Björk / Underworld).

People will know your brand of electronic music from several TV scores and your well received Inner City Angst EP, does your newly released self-titled album You Love Her Coz She’s Dead follow the same vein?
Not really, it’s more varied than the EP we did in 2008 with Kitsune, our tastes and sounds have evolved on into something different.

More dirty, some slower tempo down to 120bpm, as well as naughty 140bpm closer to ‘Supereheroes’ which most people know us by at 150bpm. We actually see this album (now that it’s finished) as a “half way house” to where we we’re still trying to push to with the music. Our next release will be here very quickly because we’ve got second album material coming out of our ears already, and it’s just getting filthy now.
FREE DOWNLOAD – You Love Her Coz She’s Dead – Leap Of Desire I [OUT NOW] by youlovehercozshesdead
Where did the bands name come from?
It’s just about how artists become more appreciated in death than they ever were in life. I (Jay) named the band.

People could read something inappropriate into the name couldn’t they?
If they’re sick in the head yeah. It never occurred to me until someone make that connection that I’m obviously aware now from being asked numerous times about it.

So how did you two meet and decide let’s form a band?
The band already existed a few years as a solo bedroom project, and developed into a live thing once we met in a bar in 2007. Played our first live show New Years Eve at a house party 2007.

How would you describe your style of music?
We used to call it “superdigi” as a made-up genre (which is another name of one of my bedroom projects). For years we described ourselves as “shit… but good… but shit” because that is and was pretty realistic. But more descriptively it’s distorted melodic dancey punky rave music.

You won an Indy award in 2008 for best Electronica act, how did that feel?
We felt shocked, surprised and grateful that anyone was evening listening. We would have been happy with an award from the local post office.

Do you like being pigeon holed (alongside bands such as Crystal castles etc)?
We’re not really fussed. That’s an old comparison that’s followed us around much longer than it had to purely because we didn’t put out an album for 3 years. We personally don’t see the comparison with the album’s musical content, but for people who have not been emersed in the dance music scene as we have been for years now, it’s pretty natural for them to see the boy-girl line-up, the fashion sense, and still make a snap judgement. People are used to comparing the 2 bands now, so who knows if it will ever lift, but we don’t lose any sleep over it.

Do you utilize social media to promote your music?
Not hugely, i spend enough time looking at a computer making music. It’s obviously useful to let folks know what’s going on with shows and stuff on a DIY level, but as a band we’re not huge fans really, and mainly use it to talk “remixes” with other artists overseas. It’s shit that any bands these days would realistically be “off the map” if they opted out of social media sites where people generally fire searches for bands they’ve heard of. So unless you’re a band rich enough to buy yourself onto the front cover of NME for promotion like some haha, i think we’re all stuck with social media…

What can we expect from the band now that your debut album has been released?
We don’t know – YLHCSD is still very DIY. We struggle just like every other band that doesn’t have an all powerful organisational influence behind it pulling strings. Off our own backs we already fly out to club shows and festivals, and we’d like to tour the world, especially US and Chile because we get a lot of love from over there, but we only have a small team of mainly friends, so who knows we might be DIY forever! Or maybe someone will give us a hand!

Where would you like YLHCSD to be in 2012?
Either living in a tour bus or on a self sufficient farm in Ecuador. Place bets now.
facebook.com/youlovehercozshesdead1