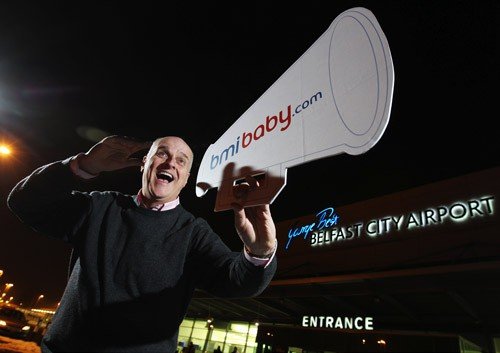 bmibaby customers flying out of and into Belfast City Airport in January were welcomed on board by one of the most famous voices in the UK Â–,the X Factor voiceover man, Peter Dickson, who hails from Dundonald near Belfast.

Using his booming tones, Peter has recorded some on board announcements for bmibaby that were played on flights to and from Belfast City Airport.

To mark the start of bmibaby services at Belfast City Airport, the Â‘invisible starÂ’ with the most iconic voice in show business helped the airline put the fun back into flying by making a personal appearance on board one of its flights.

Peter Dickson said: Â“As a Belfast man at heart itÂ’s an absolute delight to be working with bmibaby to help celebrate their move to Belfast City Airport and to bring some New Year cheer to customers flying in and out of Northern Ireland at the same time.

“I also look forward to getting to meet some of bmibabyÂ’s customers in person this week. You never know what new catchphrases I will be able to mastermind with their help during the course of the flight.Â””

bmibabyÂ’s move to Belfast City Airport will bring more convenient services to business and leisure customers wishing to travel from the heart of Belfast to key cities within the UK. The airline currently flies from Belfast City Airport to East Midlands, Birmingham, Manchester and Cardiff, and from 28th March 2011 it will commence services to London Stansted.

For more information or to book a flight visit www.bmibaby.com