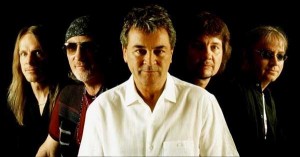 Deep Purple have announced a Belfast date at Customs House Square.Along with Led Zeppelin and Black Sabbath, they are considered to be among the pioneers of heavy metal and modern hard rock, although some band members have tried not to categorise themselves as any one genre.

The band also incorporated classical music, blues-rock, pop and progressive rock elements. They were once listed by the Guinness Book of World Records as the world’s loudest band, and have sold over 100 million albums worldwide.