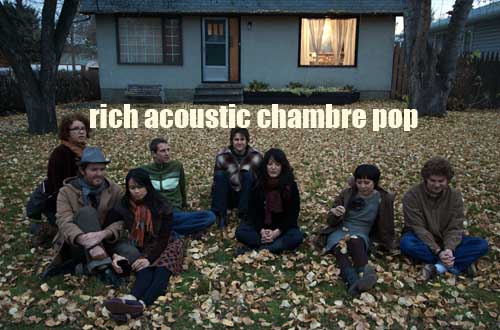 Woodpigeon are an intriguing proposition. They’re a sort of semi-acoustic Arcade Fire or a full-band version of Sufjan Stevens. Their lushly orchestrated folk-pop, featuring wispy boy-girl harmonies, posits them as a cross between Prefab Sprout and Fairport Convention. Some of their songs are simple and unadorned while others are more ornate and complex. Mostly, they specialise in twinkling melodies that feature layered arrangements and build to epic climaxes. 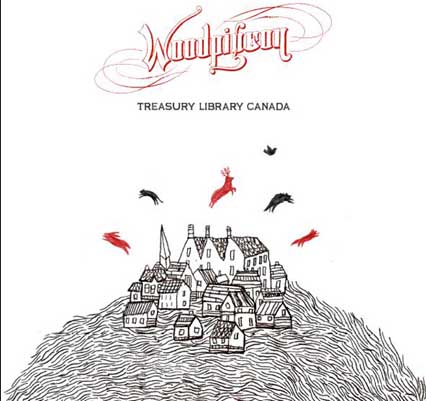 Woodpigeon are a musical collective from Canada, each of whose members plays with a number of other local groups â€“ one such related project is The Summerlad, who did a show on Valentine’s Day where they played nothing but My Bloody Valentine covers. They’re also a vehicle for the “sad words wrapped in pretty pop music” of frontman, guitarist and songwriter Mark Hamilton, who moonlights as a journalist. He is Woodpigeon and so are they â€“ all eight of them, plus the additional members from various places across Canada who do everything from play sax to help with the stage visuals and provide remixes.

Confused? At least he/they aren’t trading under their original unwieldy name: Woodpigeon Divided By Antelope Equals Squirrel (or W/A=S for short). Apparently “woodpigeon” is one of Hamilton’s favourite words because “it looks like a rollercoaster when it’s written in cursive”. Sure it does. Just like a rollercoaster. And “Mark Hamilton” looks like a swan wearing a Pac-A-Mac abseiling off a cliff when you see it translated into Aramaic.Woodpigeon are notable for their long-winded song-titles such as Home as a Romanticized Concept Where Everyone Loves You Always and Forever, A Sad Country Ballad for a Tired Superhero and In the Battle of Sun Vs. Curtains Sun Wins and We Sleep Until Noon, which is about depression and a medical condition called hyper-insomnia.

One of their tunes, Death by Ninja (A Love Song), is an ode to the titular Japanese martial arts warriors that opens with the immortal line, “I went to ninja school to learn how to murder you with just one little punch”.Often, Woodpigeon’s blissed-out orch-pop, hushed hymnals and latterday lullabies provide a sugary cover for Hamilton’s dark meditations on love and life, suggesting all manner of repressed longings and troubled fantasies. “I usually hide my anger in really pretty songs,” says Mr Pigeon, a bit of an eccentric who collects books, photographs, paintings, musical instruments, even different types of tea.

“I’ve written one called Bad News Brown that came out of a period where I wanted to write murder ballads, but they all came out really pretty. If you listen to the words, it’s like someone’s obviously killed someone and there’s blood all over their clothes and the curtains and stuff.” Woodpigeon: they make the creepy sound charming. You can have that one for the posters.
woodpigeon-songbook.com