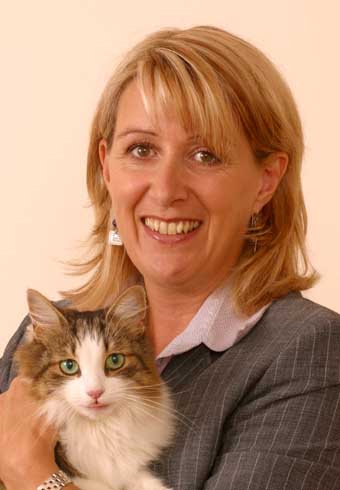 The stereotype of the typical cat lover is a single female who has never married. But according to a new survey conducted by cat behaviour expert, Vicky Halls, this clearly isnâ€™t the case.

According to Vicky, â€œI have actually known for some years that the stereotype was wrong since the majority of my clients are married or living with a partner. The majority donâ€™t have children and are in full-time work. Is this significant? I think it is. These are not women biding time until they have a real baby without the fur. Whether we make the decision to pursue careers instead of families or remain childless for another reason we still need to perform the role of mother for which we were designed. A cat is fulfilling that need.

And the overall result is rather surprising as it shows that the majority of owners DONâ€™T REGARD THEIR CAT AS A PET AT ALL! Cats have upgraded their status from pet to family member.

This implies that the catâ€™s perceived wishes are considered when making decisions, including those about holidays and moving house. Vicky comments, â€œI know of many owners who donâ€™t go away because the cat would be lonely, donâ€™t sit on the sofa because the catâ€™s comfortable, get up in the middle of the night because the catâ€™s bored and generally put themselves way down the list of priorities. Thatâ€™s some family member!â€

Cat owners are an anxious lot…

Vicky Halls is the UKâ€™s leading cat behaviour specialist. Author of Cat Confidential and Cat Detective, she has devoted her life to studying the human/feline relationship. On vetsâ€™ referral, she travels the length and breadth of the country visiting owners who are having problems with their cats.

In her new book, CAT COUNSELLOR, she turns the tables and asks how would cats really like us to behave towards them? Whatâ€™s in the relationship for them? Are we giving them what they want? Is just loving them enough? Can we love them too much?

Cat Counsellor: How Your Cat Really Relates To You is published by Bantam Books on October 11 at Â£6.99

*the survey was conducted by Vicky Halls on her website vickyhalls.net and based on 400 completed questionnaires.