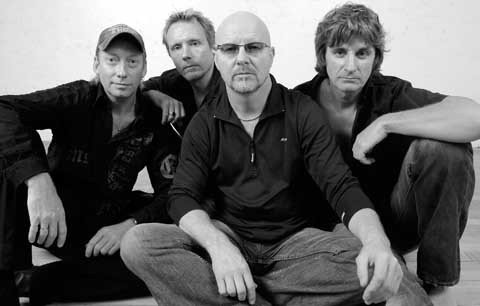 Wishbone Ash take â€œClan Destinyâ€ on the road again this fall. Itâ€™s a family thing. Thatâ€™s how Andy Powell explains the title of Wishbone Ashâ€™s latest release, â€œClan Destiny.â€
The albumâ€™s name is a pun that came to Powell while he was doing yard work at his Connecticut home. â€œWeâ€™re like the greatest unknown band, so thereâ€™s something clandestine about that,â€ he explains. â€œThereâ€™s a lot of clandestine stuff going on in the lyrics. The pun comes in because of Wishbone Ashâ€™s extended family of fans, and there are so many former band members; itâ€™s like a clan. We often question the destiny of this clan but it always survives, year after year.â€

Released in May 2006 by Eagle Rock Entertainment, â€œClan Destinyâ€ was recorded in a little more than three weeks at Blue Jay Studios in Carlisle, Mass., USA.
According to Powell, one of the bandâ€™s founding guitarists and longtime bandleader, â€œThe work seems, to my ears, to be a natural follow on from (previous studio release) â€˜Bona Fide,â€™ but with even more focus on the songwriting.â€ After nearly nonstop touring through the first half of 2006, Wishbone Ash took a break from the road. During that time, Powell was inspired to write more songs that will likely see the light of day on a late 2007 studio release.

Fall 2006 sees the boys takinâ€™ it to the United Kingdom and select U.S. cities. An annual highlight is AshCon, the traditional fan convention and concert taking place this year on Nov. 4 in Chesterfield, U.K. In addition to Powell, the Wishbone Ash lineup features one of the most solid rhythm sections in the business, bassist Bob Skeat and drummer Ray Weston. The duo combines journeyman chops with the polish of veteran studio musicians. Weston was interviewed in the July 2006 issue of Rhythm Magazine.

Recently, Powell was honored by the listeners of Planet Rock radio in the U.K. when they included him in the stationâ€™s list of the Greatest Guitar Solos ever. Powellâ€™s soaring riffs on â€œThrow Down the Swordâ€ (from the bandâ€™s 1972 â€œArgusâ€ album) was in very good company at No. 14, nestled between Ritchie Blackmoreâ€™s classic licks on Deep Purpleâ€™s â€œHighway Starâ€ and Zakk Wyldeâ€™s pyrotechnics on Ozzy Osbourneâ€™s â€œNo More Tears.â€

Formed in October 1969 in London, Wishbone Ash was gigging by 1970. The band garnered notice in the early days for a unique blend of blues, jazz and English folk. But it was the way the guitars played melodic leads together that would become Wishbone Ashâ€™s trademark. Throughout the years, many notable musicians have contributed their talents to the band, including Asiaâ€™s John Wetton, Trevor Bolder from Uriah Heep and Laurie Wisefield, who would later play guitar for Joe Cocker and Tina Turner.
www.wishboneash.com