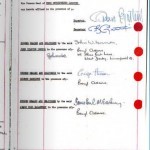 Obtaining the Unobtainable
The Biggest Ever Beatles Prize Generates Record Breaking Traffic.
In only a few days since announcing the worldâ€™s most exciting music prize, The Imagine Corporation has received unprecedented traffic, enquires have come from every corner of the globe about this ultimate prize, generating headlines in all areas of the international media. The original Beatles Contract, a piece of major musical importance is offered as the top prize from this exciting new on-line community www.imagine.uk.com. With just a few clicks, people are finding how easy it is to enter and one lucky fan will win Brian Epsteinâ€™s original Contract that John Lennon, George Harrison, Paul McCartney and Ringo Starr signed before they gained global fame and fortune as the legendary Beatles.

The Beatles are loved on every continent and over 70,000 registrations have been received from as far away as Japan, India, Australia and the USA. This amazing piece of popular music history has only changed hands a couple of times over the decades. The Contract is currently insured for Â£500,000 but is regarded as an irreplaceable piece of musical heritage.
The competition is simple and how to enter is fully explained at www.imagine.uk.com. All players have to do is work out what they think the Contract has been valued at by a panel of three experts and therefore what it could have sold for if it had been put up for auction in April 2008 at a London Auction House. The competition is like no other and is a dream ticket for any music fan.
Ted Owen, Business Development Director of The Imagine Corporation Says â€œWe knew the competition would generate global interest, but we didnâ€™t realise just how staggering the numbers would be. This is a once in a lifetime opportunity and we are delighted that fans from around the world are experiencing the excitement our competition has generated!â€
So join other fans in trying to win this amazing piece of memorabilia and log on at www.imagine.uk.com to find out how all your dreams could come true by Obtaining the Unobtainable.
For more information and to enter please visit www.imagine.uk.com