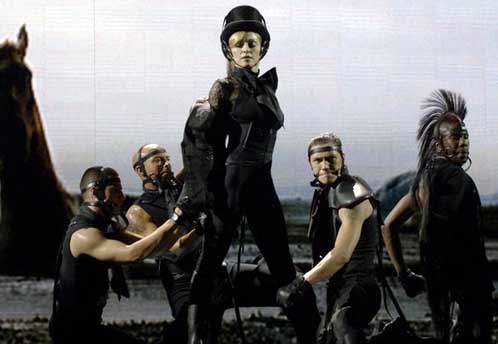 Madonna is without a doubt the reigning Queen of Pop and thereâ€™s no sign of her giving up that title any time soon as she embarks upon a revival of her record-breaking Sticky and Sweet Tour.

Littlewoods Bingo, one of the UKâ€™s leading online bingo websites is giving players at the site the opportunity to win a fantastic VIP package to see the Queen of Pop herself perform live at the O2 in July! The lucky competition winners will be whisked away to London with their Madonna tickets and theyâ€™ll also be provided with overnight accommodation at a hotel in the capital.

As the original Material Girl, Madonna has sold no less than 200 million records worldwide and has sustained her place as a member of pop royalty.
Living proof that age doesnâ€™t have to slow down anyone, at 50 Madonna is as fit and fantastic as sheâ€™s ever been. She has reinvented herself time and time again and you can bet sheâ€™s got a selection of new tricks up her sleeve during this yearâ€™s tour!

The Sticky and Sweet Tour which took place during 2008 was the biggest grossing solo artist tour in history and was seen by 2,350, 285 people!
Madonna is taking the show on the road again this year and bingo players could be in with a chance of winning tickets to see Madge in the flesh simply by playing their favourite game.

To be in with a chance of winning this fantastic prize, members of the Littlewoods Bingo site simply need to play online bingo from now until 20th June and theyâ€™ll be entered into the prize draw to win two tickets to see Madonna at the O2 Arena on 4th July.

Sign up at littlewoodsbingo.com to be in with a chance of seeing those famous vogue moves live!