There’s one thing you can be sure of in 2008: Wilko Johnson, the Essex Assassin, will still be wowing audiences the length of the country with the unique brand of Rhythm’n’Blues-based rock he pioneered with his band, Dr. Feelgood in the early seventies. 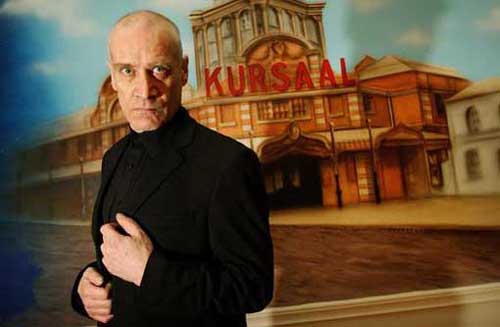 The man who put Canvey Island on the cultural map has, since then, been making some of the most influential music this country has produced since the Rock’n’Roll era began, when the original Feelgoods, radiating violence and neurosis, ripped a stagnant UK music scene asunder in a torrent of hitherto unimagined switchblade-slick, stripped-bare, feral, three-chord R’n’B.

At a time when all bands wore glittery capes’n’purple platform boots, and concept albums about the universe were the norm, maaan, the Feelgoods were a radical proposition: adopted by a generation fast growing bored with their elder brothers’ progressive rock, the Feelgoods’ urgency – combined with Wilko’s innovative songwriting, unique image and performing skills (namely his psycho-duckwalk: in every solo he’d come shooting out from his trap like a bug-eyed Walthamstow rabbit, machine-gun the audience with his trademark black and red Telecaster and careen across the stage in a pretty good impression of an amphetamined, malfunctioning Dalek), were an enormous and often since criminally-underrated influence on the genesis of the Punk Rock movement. It’s therefore fair to say that in the UK, not since the first wave of classic British Râ€™nâ€™B groups in the sixties, has one man evolved a more personal and distinctive musical style from the basic elements of Blues and Rock’n’Roll than Wilko.

As evidenced by his rip-snorting live shows, which showcase songs from throughout his illustrious career, Wilko is lean, mean and totally wired. His latest album, â€˜Back in The Nightâ€™ (Jungle Records) is a ‘best of’ collection, featuring many of the songs that made him famous and which keep audiences worldwide coming back to see him perform. Wilko in concert remains an enthralling experience.

The perfect onstage foil for Wilko is bassist Norman Watt-Roy: widely regarded as one of the most accomplished bass players in the country, Norman shot to fame in Ian Dury & The Blockheads, and has contributed his considerable talents to recordings by artists as diverse as The Clash and Frankie Goes to Hollywood. This powerhouse trio is completed by another ex-Blockhead, Monti. He’s another Canvey Island original who has played drums with many cutting-edge bands including the Cocteau Twins, the Jesus and Mary Chain and Curve.
myspace.com/wilkojohnson