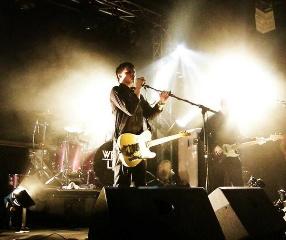 White Lies have taken the World by storm.

After delaying their first performance for five months to build up media hype, they earned a recording contract with Fiction Records days after their debut.

The release of singles “Unfinished Business” and “Death” led to tours and festival appearances in the United Kingdom and North America including a headline performance at BBC Radio 1â€™s Big Weekend and a place on the 2009 NME Awards Tour.

Further singles “To Lose My Life” and “Farewell to the Fairground” led to further media attention and the band’s first worldwide headline tour. Upon the release of their debut album, To Lose My Life… White Lies became the first British act in 2009 to achieve a number one album.

They have performed at most of the summer festivals, including Oxegen, T in The Park, 2 Glastonbury shows, and are set to play Leeds and Reading before heading on a UK and European supporting Cold Play.

White Lies then head of to the States to support Kings of Leon before coming back to the UK for a headlining tour.

White Lies
â€œEverything has got to be love or deathâ€ â€“ â€˜Deathâ€™, White Lies

As teenagers in what now seems a different life, they were a band called Fear Of Flying, lumped in with the underage Way Out West club scene. Theyâ€™d known each other since they were babies in West London, playing together since bassist Charles Cave and drummer Jack Brown struck woodblock and triangle at a school play. Not so many years later, they formed a proper band at the age of fifteen with singer Harry McVeigh (Jack got his first drum kit literally a fortnight before the band formed).

Those years spent playing weeknight gigs to an excitable burgeoning fanbase and being driven home at midnight by their mums in time for assembly in the morning were all in aid of finding their musical feet. Starting with a jagged and jittery desire to make any music they could and influenced by each memberâ€™s vastly different musical taste, they gradually honed their style into a more atmospheric, grandiose beast. Then last October they found themselves writing an elegiac mood rock masterpiece by the name of â€˜Unfinished Businessâ€™ inside fifteen minutes. Realising it was the first of their songs which was the work of master pop craftsmen rather than enthusiastic trainees, they decided on a fateful tube journey home from the studio that Fear Of Flying were dead; long live White Lies.

â€œWe thought â€˜This is veering towards something much betterâ€™.â€ says Charles. â€œAnd there came a point where we realised we had these new songs that sounded really different, so we decided to wipe the slate clean.â€

White Lies were go. With their music blooming with darkness, maturity and density (â€˜Unfinished Businessâ€™ with its church organ synths, gigantic galloping gouts of guitar and mentions of having blood on your hands), singer Harry McVeigh resembled a preacher-man Julian Cope fronting a tuneful Interpol. Their transformation had to be total. Their image blackened to suit their new mood and their gigs began to rage with such devout intensity that some fans were literally driven to tears.

â€œWe wanted our first show to look amazing, sound amazing, and it needed to be perfect,â€ Jack grins. â€œIt was quite intense, we had friends who were on the verge of crying.”

Does it feel like a bit of a cult?Charles chuckles. â€œIt is yeahâ€

Writer of the bandâ€™s striking lyrics, Charles is a fresh, invigorating and slightly deviant new storyteller entering an indie landscape full of mouthy Mancs and dole-ish dullards like a dark-eyed Nick Cave overdosing on James Herbert and Shakespeareâ€™s tragedies. He is the creator of these dark, cinematic tales of murder, madness, revenge, loss and love from beyond the grave; as we speak heâ€™s working on a piece concerning a girl who hates her parents so much that, to get their revenge on her, they include a clause in their will forcing her to have them stuffed and mounted in her front room so she has to look at them every day. And thatâ€™s one of the brighter tracks.

â€œâ€˜Unfinished Businessâ€™ is a spectral tale of an argument between two lovers which goes wrong,â€ Charles explains. â€œAnd we have a song called â€˜E.S.Tâ€™ which deals with the issues and morals of electric shock therapy.â€

Certainly not the mundane subject matter that fixates many artistsâ€™ catalogue, yet the result is a brooding synth rock monolith of desolation, desperation and ultimate hope that combines with the like of the elegant orchestral pop gallop of â€˜From The Starsâ€™ and the unequivocally titled glory stomp that is â€˜Deathâ€™ to create a monstrous new talent; a band of immaculate melody, poise and portent. A band, essentially, born to play in churches.

Charles laughs. â€œDefinitely, thatâ€™s something we want to do, whether itâ€™s at a weird outdoor space or at an old church.â€

â€œIt brings people into your world if you can find somewhere that matches your sound,â€ Harry nods. â€œMaybe we should think about playing on the side of a huge lake surrounded by mountains.â€

And that new moniker?
â€œIt sounds quite pure,â€ Jack muses, â€œbut it also sounds tainted and has a dark undercurrent and so does our music.â€

White Lies: youâ€™ll either love them or youâ€™re already dead.