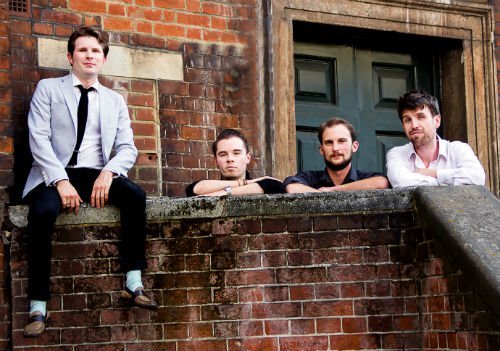 Kick It Down is a return to the raw and subversive sound that slicked the streets of ‘70s London, with a deadpan humour and take no prisoners attitude that sees the band take on urban gentrification and highlights the creativity that blossoms in some of the more run down parts of the Capital.

Hello to White Ape how are you?

Great! For the readers who haven’t heard you before how would you describe your sound?

The best description I ever read of us is that we’re garage rock but not retro. In truth there’s loads of stuff in in there: surf, punk, ska, even bits of things like Marriachi and disco but all done quite briskly and brashly and with catchy hooks too. It’s hard and fast and raw, sonically speaking, but a lot of the music is quite intricate. We don’t really do anything that’s just a slab of noise. Some of the new stuff we’re writing now has a bit of a darker Black Sabbath/Killing Joke touch to it.

This is always a weird question. I mean, my favourite band is The Beach Boys but I don’t think there’s much of them in our sound: you’d never get this lot doing the harmonies for one thing! I’m as influenced by Kurt Vonnegut and Vincent Van Gogh as I am by The Sonics. In terms of the stuff that’s more directly shaped our sound, I’d say Dick Dale, The Slits, Captain Beefheart, Johnny Cash, rockabilly stuff like Wanda Jackson, The Pistols for the theatre of confrontation, the sense of the absurd and vulgar humour but also old school hip-hop like Wu Tang, NWA in terms of phrasing and scansion. A lot of the time though, at home, I’ll play Northern Soul, reggae and ska, funk and 60s girl groups: stuff that probably has less of a direct influence on our sound. My iPod broke last week so I’ve been listening to my wife’s music, running to Abba. I don’t know why I ever didn’t like Abba: all of life is in there! 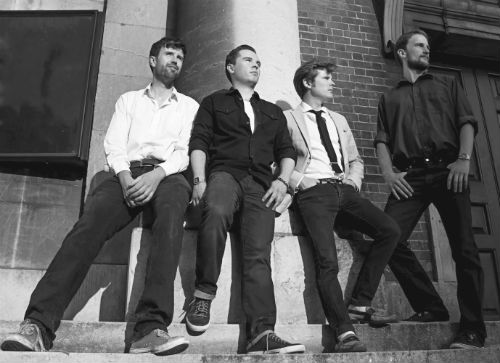 It comes from an HP Lovecraft short story. The White Ape is the grand reveal of a dark and terrible secret, so it stands for something mighty and primitive but also bizarre and grotesque which sums up the ethos of our band!

I met Mike in Tsing Tao in China when he was cycling across Asia. You can buy a litre plastic bag full of TsingTao lager for about 50p out there so we got pissed on the beach, swam a mile out to sea, swam back and formed a band.

You have just released the track ‘Kick It Down’ and will be releasing your EP in 2015. What are the themes contained on the songs on the EP?

Kick It Down is about urban regeneration and the gutting of cities: the contrast between the developers promise of urban renewal and the creativity that exists in the grotty, neglected parts of the city. Also about the sense that we’re all culpable for these things: we all feed into the economy that drives these processes.

Fighting Fit is really just a song about belligerence and violence, how the fear of violence can make us become violent ourselves: We were jamming on the main riff and I had no lyrics so I tried to thing what the song sounds like and it sounds like a stomping, swaggering bully to me.

Sink started off just being about hating my job and wanting to disappear but it came across a bit sullen and self-pitying so I tried channelling some Submission-style underwater mysticism!

Normally someone has a hook or fragment of an idea and brings it to the band and we’ll embellish it, coming up with additional parts fairly spontaneously. A lot of the songs were written very quickly. It’s a sort of guided spontaneity if that’s not an oxymoron. We don’t tend to write by jamming although we have come up with the odd thing that way and occasionally you get lucky and wake up with something fully formed playing in your head.

I’d love to open for Slaves right now. If you’re reading this Slaves, we will do it and we are cheap…

What can fans expect from a White Ape live show?

A lot of energy and showmanship, banter, loud brash songs and a lot of hooks. I think what we do is pretty accessible: if you know your music, you can hear a lot of unusual stuff in what we do but if you don’t know a lot of music, I think you can get enjoy the energy, the danceable rhythms, the hooks and the humour.

We’re going to continue running our free night, Aspirational Values at The Constitution in Camden. We’re going back in the studio very soon to record the follow up to Kick It Down. Hopefully just take our music to loads more people who haven’t heard us yet, get the world dancing to White Ape!