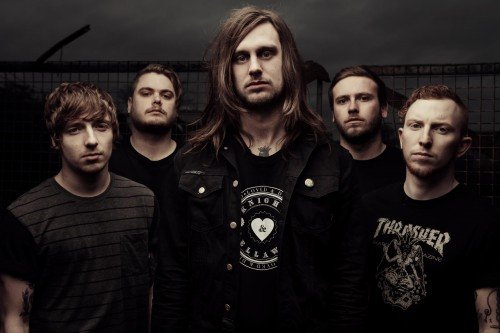 Sheffield metalcore band ‘While She Sleeps’ have made leaps and bound in the world of music in the last couple of years.

Their EP releases have gone down a treat across the globe with rock/metal fans and each tour and festival appearance has proved successful in building the five-piece bands fan base to to an enviable level in a relatively short space of time.

As the band prepare to unleash their debut studio album ‘This is the Six’, Fame met the band and learn how they feel about their surge in popularity.

So guys firstly for anyone yet to hear your music, how would you describe it?

WSS: Well…we don’t really put ourselves under a title like that. We mix metal hardcore and add in more melodic stuff, if pushed we could call what we do ‘passion metal’.

That being us a s a group, a bunch of Sheffield guys who have a real passion for metal music, especially our own.

So exactly how did the band form?

WSS: Initially it was through school. The band started out there and over the years we of course lost a few members, and even our singer.

In 2006 we took on the name ‘While She Sleeps’ and kept plugging away at making music, it was 2009 that we all decided that we would make it our full time job and that is when we really got momentum.

WSS: Well we got it form the front cover of a women’s chat style magazine. (laughs) It was this story about a wife who cut her cheating husbands gonads off and we thought it was cool band name.

Of course it was ‘While He Sleeps’ in the magazine and we had to change that to ‘She’ to suit our image better.

Your debut studio album is released soon. Does it differ in any way form your previous work?

WSS: No, what it does do is feature everything we did before, but now it is so much better. We have a great album for our fans and its production is so much better they will love it. We can’t wait to get feedback on it.

P: You have a few tours coming up, are you looking forward to them?

WSS: Yes we are indeed, we love to tour. We have UK tour coming up in September, which is just a month after the album is released. We are really excited about it. It will let us see the reaction to the album and what the fans think of it.

Our plan is to mix the live shows up and feature old songs alongside the new material.

Your popularity has really grown over the last year or so, do you see that at your live shows?

WSS: Of course we do, we see many old faces in the crowd, but also loads of new ones. It is great to see our fan base growing as it is. We have our Australian tour next week and the buzz around it so far is so exciting for us.

We are looking forward to those shows and even the long distance can’t put us off. It can be a bit daunting travelling so far, but are just going to go with it and enjoy the experience. 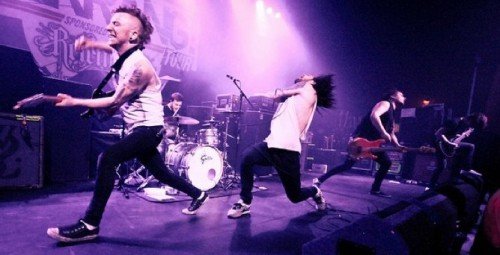 P: So guys is the US the next target for ‘While She Sleeps’?

WSS: Well we have a lot of tours lined up right through to the end of this ear. But we do hope to go there next year. Nothing is set in stone, but we we do hope it will be a reality soon.

What about festival shows, do you enjoy them?

WSS: They are amazing to be a part of. We have just had a big run of them. What is great is that you usually get a big crowd and we get to rub shoulders with some awesome bands too.

We do admit that we get a little starstruck at times, when we meet big names. We’ve jumped on stage with the likes of Limp Bizkit and at Download we hung out with Tenacious D. It is a dream come true at times.P: Have you any favourite venues when you tour the UK or further afield?

WSS: We love so many of them that I’d fine it tough to pick individuals out. Our home town Sheffield ones are always good and maybe the most welcoming.

Of course when we are not on tour we are going to these same venues anyway and they all know us. The rest of the country and Ireland are the same, we are amazed at how many people at our shows sing back all of the words to us.

Do you ever stop touring?

WSS: We plan to tour as much as we can, we need to. Our fan base is growing, but there is still an awful lot of work to do.

We feel most comfortable on tour, we will be everywhere this year, the UK, Europe and of course Australia too.

I know your band worked hard to gain the success you have had so far and gained your reputation through your hard work. How do you feel when you see talent shows spring singers/acts into the spotlight without that hard work and reward them with hit singles etc?

WWS: Personally we don’t like shows like that. We feel you have to do your time, those talent shows are all good if you have a natural talent, but in reality you do need to earn your way and pay your dues to succeed in this business.

Let them people do what they want and whatever way they want, but it cannot be too fulfilling to know you have made it big in the industry in that way. Pour advice to you bands would be do your research, get a number of years under your belt and tour as much as you can.

Finally may I ask what kind of music the band listen to when they are chilling out after a gig?

WSS: We listen to lots really, hip hop, rock and pop all get their turn. Anything really, it can depend on the mood and after all you cannot listen to metal forever, it does get to you after too long.

Our fans may not believe it, but we are all a it partial to some dance music at times.
‘This Is The Six’ is out on August 06 through Search And Destroy Records.
wssofficial.com/
facebook.com/whileshesleeps
©FAMEMAGAZINE.co.uk