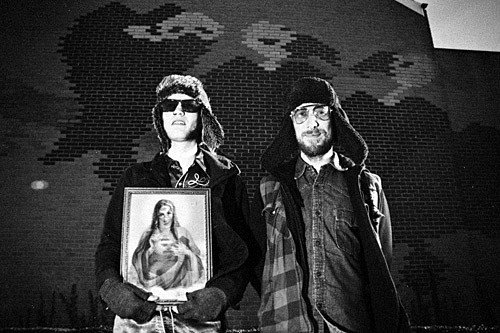 Wet Nuns thunderous new single ‘Throttle’ which is released on March 5th, is being tipped for greatness by Arctic Monkeys’ Matt Helders.

So FAME went to find out more about their trademark modern lo-fi, blues-stoner-punk sound.
Firstly guys can we ask where the band name came from?

We come up with a lot of stupid concepts for bands. Wet Nuns is a host of many stupid ideas. We wish had enough time to make all of them a reality.

But we don’t. Originally Wet Nuns were going to play hardcore and wear nothing but nuns habits and leather underwear.

Well, we didn’t want to be a cover band, like Oasis. So we had to come up with some songs. The same stuff that inspires anyone to be in a band.

Listening to other bands and stealing their best riffs. Drinking and acting like idiots. A lot of ideas come from just talking rubbish.

We like talking rubbish. Main influences are obviously women, death and Enya.
What is your writing technique, do you work together or combine ideas at a later stage?

We employ a variety of different ways of writing songs. There’s no formula. Any band will tell you the same.

However, we do find that sniffing the dung of rare jungle mammals until a point of hallucination can prove very productive.

How does it feel to be receieving such praise for your music, I’m sure many of peers are wishing they were an NME band ot watch?

Its pretty cool that anyone likes what we’re doing. The main thing on our mind at the moment is fulfilling peoples expectations.

Wet Nuns have a very loyal fanbase, what do they get from a live show? Regardless of gender, everyone gets an erection at our gigs.

Your current tour is over 20 dates, what will a typical day on the road be like for you?

Hours and hours staring at each others hideous faces in the back of a van. Muttering abuse at each other and pissing ourselves.

Do you enjoy smaller more intimate venues or is the dream to play larger ones?

Our dream is to play the grand canyon. We hate being near the people watching us. They distract us and they smell. On the flip side we love playing small venues.

We once played a gig in our local park toilets. We hate being far away from the people watching us. We love being able to smell them.

What’s next for Wet Nuns?

Currently we’re just trying to get through the tour. So far we’ve played 2 gigs and already we’ve both had terrible dysentery and our driver has been in hospital.

Matt Helders remixed your recent release ‘Heaven’s Below’ how did that colloaboration come about?

We have some mutual friends. He asked if he could do a remix of another tune of ours and we could not turn him down.

It was so good that we asked him to remix Heavens Below as well.
Your style of music is punk based, why do you think punk has remained so popular over the years when other genres have waned?

Punk changes all the time. Perhaps punk is just a word. Our influences are rooted in many genres.
wetnuns.com