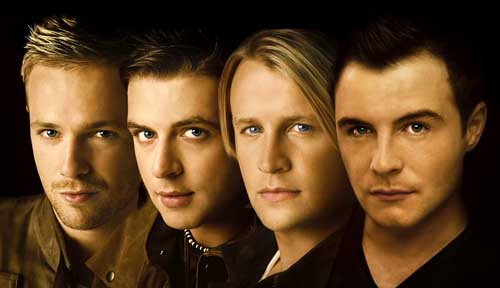 Kian added “We’re going to perform over 60 dates around the globe and will put on our most spectacular show ever. We’re also heading to the Far East and Australia for a series of big shows. It’s going to be one of our biggest tours ever and we can’t wait to get out and perform for the fans again.”

The track â€˜Homeâ€™ that is currently available on iTunes and other download sites is NOT the new single, itâ€™s a track from the bandâ€™s 2003 album Turnaround.

We’ve got another exclusive for you â€“ the tracklisting to Westlife’s new album Back Home, out on 5th November.
WESTLIFE
Back Home Tour
Live at the Odyssey Arena â€“ 25th & 26th Feb 2008
Tickets will go on sale tomorrow Friday 19th Oct at 9am
aikenpromotions.com
odysseyarena.com
westlife.com