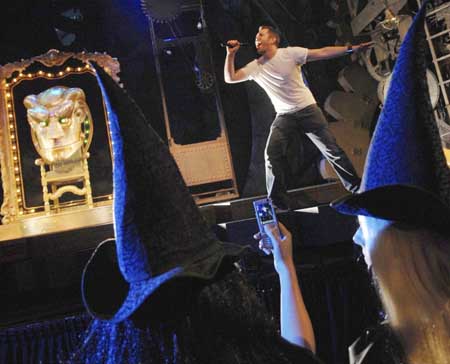 Budding theatre wannabes take note, Orange has teamed up with the cast and crew of the hit West End musical WICKED to launch a nationwide search to find â€˜Britainâ€™s most wickedâ€™.

The competition, which celebrates Orange becoming official communications partner of the show, will see one lucky winner offered a once-in-a-lifetime, walk-on appearance in the spellbinding and spectacular show at Londonâ€™s Apollo Victoria Theatre.

Open to all, you neednâ€™t be a first class crooner or a Broadway starlet to take part. To enter and be in with a chance of rubbing shoulders with the cast, all you need to do is send in an audition clip of yourself, singing along to one of five WICKED excerpts (available free to download on orange.co.uk/wicked ) that proves exactly just how WICKED you really are.

A selection of the best clips will then be entered into a series of public votes on Orange World (the Orange mobile portal) allowing users to vote for their favourite â€˜wannabe witchesâ€™ and â€˜wizardsâ€™. The semi finalists from both categories will then be invited to London and audition X-factor style in front of a panel of theatre experts, including Executive Producer for WICKED – Michael McCabe.

Speaking about the auditions, Michael McCabe said: â€œWeâ€™re really excited to be working on this groundbreaking collaboration with Orange. People will learn about the show, get involved with theatre and if they really impress us â€“ get to appear on stageâ€.

Steve Wallage, Content Manager, Orange UK said: â€œFor us itâ€™s about bringing consumers closer to the entertainment they love, and this competition along with the exclusive backstage content weâ€™ve worked with them to develop is a great way of doing that.â€

Exclusive behind-the-scenes footage of the WICKED cast and crew, filmed by lead star Oliver Tompsett, will be available as a series of exclusive video diaries free to fans of the show on Orange World.

To find out more about this and on how to enter, visit orange.co.uk/wicked or Orange World if youâ€™re an Orange mobile customer.
WickedTheMusical.co.uk
myspace.com/wickedthemusicallondon