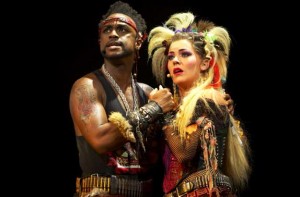 The sensational smash hit musical by Queen and Ben Elton, â€œWe Will Rock Youâ€ is set to rock into Dublinâ€™s O2 from 20th to 31st January 2010.

After its huge West End success, the musical has embarked on a tour of six-cities visiting Sunderland, Birmingham and Bristol as well as a mammoth 12-week run in Manchester. The tour, which is currently in Bristol heads to the Edinburgh Playhouse on 4th November before finishing its sensational run in Dublin.

Actor and musician, Jonathan Wilkes plays the role of â€˜Khashoggiâ€™, the Chief of the Secret Police who answers to Killer Queenâ€™s every command, whilst former Coronation Street star Kevin Kennedy plays â€˜Popâ€™, a librarian who is stuck in his â€˜hippieâ€™ past and is searching to find answers to the end of rock music.

X Factor star Brenda Edwards plays the domineering role of â€˜Killer Queenâ€™, Head of Globalsoft, the corporation responsible for the banning of all instruments and musical originality. TV star Georgina Hagen plays â€˜Meatâ€™, the main female of the Bohemians and â€˜Iâ€™d Do Anythingâ€™ reality contestant Ashley Russell, plays the â€˜Teacherâ€™, who befriends students whilst actually working as a spy for Globalsoftâ€™s Secret Police.

The London production alone has been seen by more than four million people, played over 2300 performances, and grossed more than Â£100 million at the box office.

On announcing the Dublin shows, Queenâ€™s Brian May said: â€œWe are excited to be able, finally, to send a brand new top class WWRY company out on tour to Ireland. We are completely hands on, and will be visiting! The Mother Ship, in the Dominion Theatre, London, will be rockin’ on all the while, keeping the home fires burning, until further notice!â€

WE WILL ROCK YOU. A Phil McIntyre Entertainment / Queen Theatrical Productions/ Tribeca Production.