Scottish rock band We See Lights today fought off competition from across the country to be crowned the winners of this yearâ€™s BT Battle of the Bands contest, earning themselves a coveted spot playing the main stage at this yearâ€™s Isle of Wight Festival in association with BT.
The seven-strong Edinburgh group triumphed over nine other up-and-coming acts from across the UK in the national final earlier today at the BT Tower in Central London. 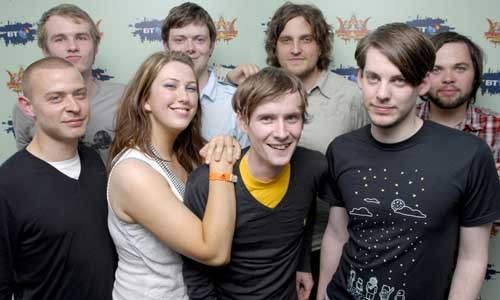 BT, the primary sponsor of this yearâ€™s Isle of Wight Festival, hosted the Battle of the Bands contest to give the UKâ€™s hottest new musical talent a once-in-a-lifetime chance to perform in front of thousands at the Festival this summer. The 3-day festival takes place in June and will include performances from the Sex Pistols, The Police and Ian Brown.

We See Lights will be following in the footsteps of rock greats including The Rolling Stones, Jimi Hendrix and David Bowie, all of whom have appeared at the legendary festival. The band impressed the panel of music industry experts, including Starsailor vocalist James Walsh, singer Arno Carstens and Isle of Wight Festival organiser John Giddings, plus Gavin and Stacey star Mathew Horne.

Runners-up The Velcros and The Tempus didnâ€™t go home empty-handed, earning themselves a high profile support slot alongside Starsailor at Londonâ€™s Borderline later this year.

The BT Battle of the Bands competition provides a platform for the rising stars of the UK music scene to showcase what they are really made of in front of a massive audience of both potential fans and the cream of the UK music industry.

We See Lights are a seven-piece act, with an uncompromising, multi-layered sound. They have already gained the support of XFM in Scotland and have many gigs planned across the UK.

Matthew Dearden, director of home phones said, â€œWeâ€™re delighted to offer We See Lights the chance to appear at the famous Isle of Wight Festival. The judging panel was impressed with the bandâ€™s stage presence and songwriting, and all agreed that they had the perfect festival soundâ€.

An extra wave of tickets for this yearâ€™s sold-out Isle of Wight Festival is now available from bt.com/isleofwight