Brooklyn based indieâ€“rock duo We Are Scientists have announced a date at The Mandela Hall on Wednesday 9 April as part of an Irish Tour. 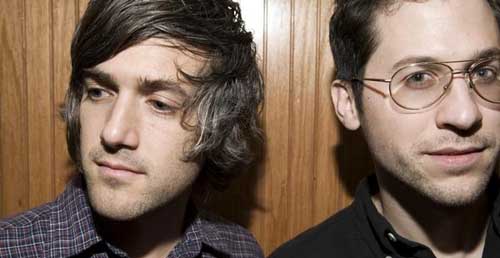 We Are Scientists shocked themselves and impressed many others with their 2005 debut With Love & Squalor. Twenty months of near-constant touring culminated in a sold out UK tour, including two nights at Brixton Academy, in the Fall of 2006, plus a very pleasant Christmas. The band spent 2007 at weight-loss camps, alcoholics’ dry-out facilities, and a race car school, yet has also found time to pen, record, and road-test their sophomore offering, Brain Thrust Mastery which is due for release in March.

We Are Scientists began, in spirit, at Pomona College, in Claremont, California, in the Fall of 1997, when Keith Murray and Chris Cain met at a viewing of Dawson’s Creek held in the latter’s dorm room. Though at the time they couldn’t suspect any of the details of the coming decade, it was apparent to both of them that they would spend many long years riding buses together — some kind of pro-sports, they assumed. In 1999, freshly graduated and moved to Berkeley, CA, the two started We Are Scientists with little more between them than a dream, a couple of cut-rate instruments, and $1.4 million in lottery winnings.

Nine years later, the band has long-since relocated to more fashionable New York City, seen many countries their parents swore to them were ‘myth, accursed myth’, and finally dated girls. In the Fall of ’07, long-time drummer Michael Tapper retired from the band, and We Are Scientists added a new drummer, plus, in a fit of accumulation, a fourth man on-stage. As well, Keith and Chris began giving inspirational lectures at universities across the UK during their hitherto unencumbered afternoons. On Brain Thrust Mastery, all the experience, and some We Are Scientists only read about, shows.

We Are Scientists play The Mandela Hall
Wednesday 9th April
Tickets Â£18.00 are available from Queens Students Union and all usual Ticketmaster outlets from Friday 1st February
OVER 18â€™s ONLY
wonderlandpromotions.co.uk
wearescientists.com