Definitions of the word Haunting include â€˜unforgettableâ€™, â€˜lastingâ€™, and â€˜continually recurring to the mindâ€™ and so it was with careful reflection that Irish quartet Black Soul Strangers chose this as their latest single.

Released March 14th on Squeek Records, the evocative piece of musical soul searching was written by the band whilst growing up in a run-down area of west Dublin as they watched most of the people they grew up with â€˜fade away into drugs or alcoholâ€™.

Front man Barry Gorey, who wrote the lyrics to the track said:’It was during this time that my father suddenly passed away. This was when the idea of slowly crafting songs went out the window, and everything just poured out of meâ€™ 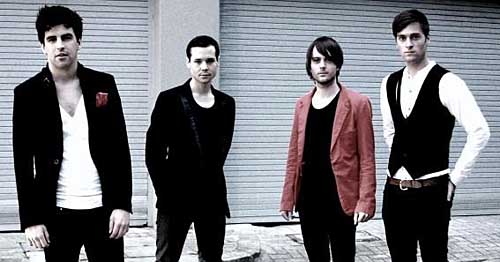 Unashamedly stating their sound as Pop Rock, Black Soul Strangers draw their inspiration from artists like Joy Division, Queens of the Stone Age and Damon Albarn and they separate themselves from the competition with their no nonsense, high velocity tunes and their fantastic work ethic.

Their raucous riffs have attracted the talents of Tom McFall – Producer and Engineer for Snow Patrol, Bloc Party, Editors, REM and Weezer. The upcoming album has also been mastered by John Davis who has worked with industry heavyweights such as Led Zeppelin, REM, Primal Scream, and Florence and the Machine.

With so much hype surrounding the band, it begs the question â€˜Just who exactly are the Black Soul Strangersâ€™? Created in an old school house in coastal Donegal, Ireland, when front man and guitarist Barry Gorey and drummer Brendan Oâ€™Mahony first started writing together, it wasnâ€™t long before they knew they were onto something. They added bassist and vocalist James Oâ€™Brien and guitarist and synth player Philip Wyer and their exceptional musical line-up was complete.

Bridging the gap somewhere in between the soundtrack and the stadium, their debut album Animate (scheduled for release in May 2010) is shaping up to be one of the most eagerly anticipated this year. Incorporating everything from a crashing drum across a studio floor to a 50 strong choral harmony, it is bathed in depth and versatility swooping gracefully from the delicate to the immense. (For an interview with the band about the making of Animate please see the link at the bottom of this press release).

Black Soul Strangers have already made an almighty wave on English shores with their energy packed, high octane live shows and were recently named â€˜the ones to watch in 2010â€™ by Barfly and Death Disco (Notting Hill Arts Club). With a burning ambition to conquer the four corners of the UK and everything in between and a fanbase that already includes Jo Wiley, Ferne Cotton and Kat Wong, (Zane Lowâ€™s producer), Black Soul Strangers are here to stay.

As NME quite rightly put it, they are â€œa band who actually look and sound successful before their time…Strangers, eh? Not for much longerâ€.

These guys are set to rise to the top of the game – donâ€™t miss a step of their journey!
www.myspace.com/blacksoulstrangers