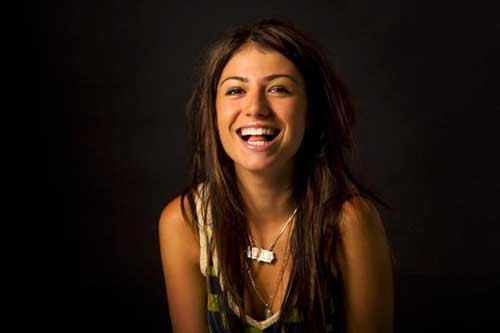 GABRIELLA CILMI’s debut album ‘Lessons To Be Learned’ is ALBUM OF THE WEEK at Radio 2 next week. At 16 years old, Gabriella officially becomes the youngest ever solo artist to reach the No.1 spot in Australia this week with debut single ‘Sweet About Me’. In the UK, the same song soundtracks a massive TV ad campaign for Sure, running from now through to May 12th.

In addition to her headline shows in June and appearance at T In The Park in July, GABRIELLA also confirmed this week that she would be performing at the V Festival 2008 in August. Album ‘Lessons To Be Learned’ is officially on full release in the UK on 28th April, with a second single to follow in June, to coincide with her headline shows.

Radio 2 ALBUM OF THE WEEK next week. No.1 in the physical SINGLES CHART in Australia this week, No.1 on iTunes Australia Chart last week. OFFICIAL UK RELEASE DATE FOR DEBUT ALBUM LESSONS TO BE LEARNED MOVES FORWARD TO 28TH APRIL 2008 Available in a few outlets, debut album Lessons To Be Learned enters UK Album Chart at No.31. Three headline shows confirmed for June, upfront of a performance at the T In The Park Festival

After a flying visit to her homeland, GABRIELLA CILMI has scored her first No.1 single, topping the Australian Physical Singles Chart this week with her debut single Sweet About Me. The single reached No.1 on the iTunes Australia Chart last week. With this success, the full release of her debut album Lessons To Be Learned moves forward to April 28th 2008 through Island Records.

On the strength of advance pre-orders alone, Lessons To Be Learnedâ charted in the UK Album Chart this week at an impressive No.31, after the album was made available in a few selected outlets due to the international success. Lessons To Be Learned had hit the Top 5 in Amazon’s Pre-Sale Chart the week before, the highest-ranking new artist on the chart after only Madonna, REM and Portishead, and her debut taster single Sweet About Me is currently soundtracking a new TV ad for Sure deodrant.

With all promo and advertising scheduled around the official full release at the end of April, the early chart position shows how reactive the public are to a major new talent like 16 year old Australian/Italian Cilmi.

Combining pure pop sass with a sophisticated husk of a voice, Lessons To Be Learned is an outstanding debut from one of the most exciting new singers to emerge this year, one who sounds as great on record as she does live. Having just finished touring the UK with Sugababes, and Nouvelle Vague before that, Gabriella confirms her first headline shows in the UK, in London, Manchester and Glasgow, details as follows:
7th June â€“ London, Bush Hall ** 8th June Manchester, Ruby Lounge ** 9th June Glasgow, Oran Mor

The dates will be followed by a performance at the T In The Park Festival on Saturday 12th July, joining the likes of Black Kids, Glasvegas and Cajun Dance Party on the Futures Stage over the weekend.

Word-of-mouth began to spread on Gabriella when a show-stopping performance for the as-yet-unknown singer of her debut single Sweet About Me aired on BBC 2 Later With Jools Holland on December 14th. The performance was enough to spark Tips For 2008 across the press, playlists at Radio 2, Capital and BBC London and TV performances including Sounds, Freshly Squeezed and This Morning. All of which has set up for a breakthrough year for the 16 year old Gabriella. Lessons To Be Learned was written by Gabriella and Xenomania, generally considered the UK’s premier hitmakers, as Sugababes, Girls Aloud and Kylie Minogue could testify.

The results show a diversity only few artists can offer. Sweet About Me is as slinky an introduction as you’ll hear for any artist, Sanctuary a lazy-days Summer smash, Don’t Want To Go To Bed Now and Save The Lies are pure youthful growl, Awkward Game, Safer and Einstein have poise well beyond Gabriella’s years, Messy and Terrifying fast-paced, retro rockers exuding Debbie Harry-style punk femininity, Cigarettes And Lies smokey, hip-shaking blues-noir, to Got No Place To Go, one of the newest tracks recorded for the album, and arguably the most perfect pop moment from the full set and a future hit single.

Aside from her canyon of a voice, Gabriella has already spread her wings into the world of TV, film and theatre. She sang the theme to ITV’s Echo Beach drama (her cover of the Martha ; The Muffins classic features on â€˜Lessons To Be Learned as a bonus track for the UK release), provided music for the St Trinian movie soundtrack, and has been writing songs for the highly anticipated new Broadway musical, FastLove, about speed-dating, written by Craig Pearce (Moulin Rouge, Strictly Ballroom).