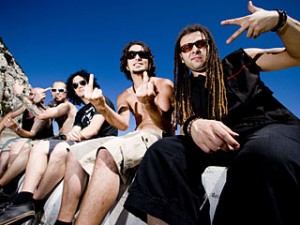 Unleashing the heaviest and most direct record of an already lengthy and distinguished career, the Gibraltarian born, and UK based quintet are fired up and ready for action.

“This album is direct and straight to the point – no one’s going to be left on the fence on this one….it’s seriously intense – it will blow you away!!” says front man Paul Isola.

With a ten year career, 4 albums and endless world tours under their belts, (not to mention a Top 40 single with ‘The River’, and a 25,000+ selling album in ‘Cultura’), Breed77 are clearly a force to be reckoned with, and a band that the UK can be truly proud of.
Resolutely intense in both their outlook and musical output, they have garnered a well deserved reputation for their dynamic and individual take on post millennial heaviness.

Mixing their native Mediterranean influences with contemporary metal and rock, (using a combination of English and Spanish), they have forged a sound that is simply – Breed 77!

The forthcoming album, titled ‘Insects’, (co-produced with Guillermo ‘Will’ Maya and mastered by Ryan Smith at Sterling Sound NY), is due out on Oct 19 2009.

“We are really stoked with what feels like our most exciting work yet,” says guitarist Danny Felice. “We’ve pushed ourselves at all levels to produce what we feel is our heaviest album but still retaining that ‘Breed’ sound.”

“We can’t wait to play these songs live,” continues bassist Stuart Cavilla. “That’s where they’re meant to be heard. The whole album plays like a live set – it’s killer!”

And the first step of this campaign will be a the ‘Wake Up’ single – a snappy blast of a tune which underlines the intense new Breed 77 sound. Check it out and see what we mean!