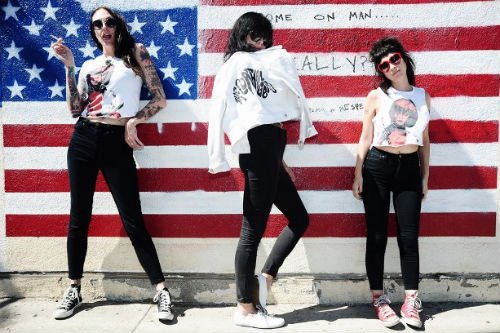 Atlanta post-punk trio The Coathangers – Crook Kid Coathanger (vox/guitar), Minnie Coathanger (vox/bass), Rusty Coathanger (vox/ drums) – started out as an excuse to hang out and play parties…To celebrate the news of their EU (incl. UK) tour in November, check out this rather funny video for ‘Follow Me’, which features metal band Mastadon in drag…Nice!

The track is taken from, their strong fourth full-length, ‘Suck My Shirt’, released in the UK on 3rd November via Suicide Squeeze Records. “It’s a balance between overthinking and just going for it,” guitarist Crook Kid Coathanger (Julia Kugel) says of their songwriting strategy…She adds “Ultimately, every album is a snapshot of who we were at the time,”

THE COATHANGERS Q&A: “BECAUSE ITS BALLSY YET NOT TOO CONTROVERSIAL”