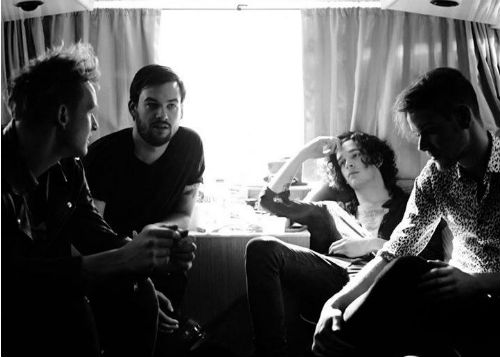 UK’s biggest new band, The 1975, reveal this rather charming video for ‘Heart Out’, the splendid and final single lifted from their massive debut album. The video for the track, a tale about problematic young love, it was written by Matthew Healy and directed by Matthew + Adam Powell…

Matthew explains: “I wanted to return to the classic performance scene. I love a good performance video and wanted to try my hand at creating something that represented my grandeur and slightly deluded sense of self, whilst also adhering to the simplistic rules of a performance. The video is about narcissism, belief and delusion in equal measure.”

He adds: “It represents how antiquated and romanticised visions of past and future shed a blazing light on the present and in turn provoke a self-analysis that soon shifts from the material to the ideological. It was in this state of excitement and obsession where the ‘Heart Out’ video was born. Obviously i can delve into the artistic vision of the video – what it means to me, the subtext and my own emotional investment within it – but in doing so I fear defacing what the video truly is about, at face value. It’s a bunch of kids who think they’re rockstars. And…they are”

The 1975 will play the following dates this autumn:
Autumn Live Dates: