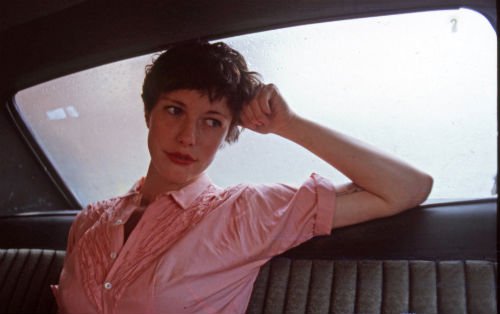 Recently signed to Xtra Mile Recordings (home to Frank Turner, To Kill A King), singer / songwriter Esmé Patterson, releases her solo LP ‘Woman to Woman’ on 2nd February 2015 ‘Woman To Woman’, an intriguing collection of tracks written entirely from the perspective of women immortalized in famous songs written by men.

The splendid video, directed by Isaac Ravishankara, for the powerful lead track ‘The Glow’, was written as a response to The Beach Boys’ agonized ballad “Caroline, No,” with Esmé playing the role of Caroline herself.

Esmé explains: “‘I was learning to play a Townes Van Zandt song called ‘Loretta’ and I started thinking about how these women were frozen in time, and frozen as archetypes, frozen in black and white. And I thought they deserved to be coloured in.’ I started thinking about how one-sided and subjective a lot of ‘love songs’ are, and how a lot of women immortalized in songs might tell a different side of the story if anyone ever asked.” Fuelled by this epiphany, Patterson started writing songs for Woman to Woman, an album of response songs to Dolly Parton’s “Jolene,” Elvis Costello’s “Alison,” Van Zandt’s “Loretta,” the Beach Boys’ “Caroline, No,” The Beatles’ “Eleanor Rigby,” the Band’s “Evangeline” Leadbelly’s “Irene” and more.