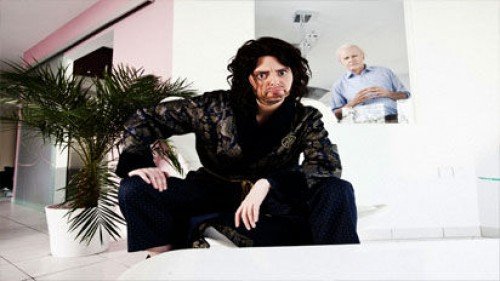 Very Important People is a new celebrity impression show that not only mocks our beloved stars but also goes on to satirize a culture now bamboozled by trivia, gossip and regurgitated ideas.

Here, Morgana and Terry discuss how they perfect their impressions, their unusual routes to success, and working down a sewer.

Your new show, Very Important People, is a sort of modern take on an impressions show, isn’t it? What’s the idea?

Morgana: We’re taking the piss out of celebrity culture, basically, in a way that I think is appropriate for the time that we’re in, and how ridiculous celebrity has become.

It’s such a massive façade, and this is just a warts-and-all look at it, basically. It’s definitely got a tone to it, a voice to it, a flavour. Can I use any other words to describe it?

Terry: No, I think you did well…

Do you think that people wouldn’t be interested in the show if it was a regular impressions show?

M: I just think that’s quite boring. I think nuanced performances are much more interesting – if there’s another layer to it and another reason as to why you’re doing it, it makes for a more well-rounded show.

And I think it’s about time there was a show like this. Celebrity has got so ridiculous. What are we watching on the telly, and why are we so obsessed with these people? It’s like a religion now.

Do you guys get input into the scripts?

T: it wasn’t cast iron writing. We went in, did that character, they would watch what we did, and then write according to how we were portraying that celebrity.
M: It’s really important to get the basics right first – we picked up on what we thought was funny about that character.

How do you research the people you do? DO you watch loads and loads of footage?

T: We both do it quite differently. It works to your own cognitive memory, however you get stuff in.

M: We’re unbelievably different in the way that we approach it. I think our impersonations are also very different in style, which is weird. Terry’s a fucking machine with voices. I’d close my eyes and sit on his lap and say “David Attenborough, just tell me you love me.” I love it.

I guess maybe I’m more visual, I pick up more on the physicality. But with Terry, if you close your eyes, you are right there. But what sort of things do you do? You put your voice over the top of footage of them…

T: Sometimes, if I can’t get it. But usually I just listen to a tiny bit. Like ‘hello’. Or ‘it’. [Laughs]. I can’t watch big chunks, because my brain can’t digest them.

M: Whereas I’ll pick a clip for a minute-and-a-half, and learn it like a song, and then change the words. But I have to work on my voice. He’s the voice guy.

Does it help if you like the person you’re doing?

M: Yeah, for me it really does. I really got into Helena Bonham Carter, because I really loved her.

T: It’s just more pleasurable when you first start the research. But I had more fun with Joe Swash and Professor Brian Cox in the end. And my impressions don’t really sound anything like them – they just become mental characters. I didn’t watch too much Joe Swash either, I just remembered him from EastEnders.

M: And then some of them are easier to get than others. Some of them are closer to your natural voice, and others are really at the limit of your vocal range.

Yeah, you sound a little bit like Fearne Cotton anyway, for example.

Whereas I’m never going to be able to get the voices just right for some of the boys, so you have to find other ways to get there.

In spite of that, you do a very good Russell Brand. Quite a few people on the series have worked with him, haven’t they? Does that add a degree of pressure for you?

M: No, they help me out, advising me on whether he’d say certain things. It came in really handy. It’s not nasty.

M: Apart from the odd thing.

T: Look at Jonathan Ross. I like Jonathan Ross, I like his radio
shows, I’m a bit of a fan, and I did not want to offend him. But I don’t think we did, really, we were just really silly. It’s barbed, but then that only happens when you’re really successful.
M: Pulling the pigtails of the one you love.

Showbiz is quite a small world. Do you know any of the people who you’re lampooning?

M: I know Fearne Cotton, actually. I did her on the Morgana show, we only had a handful of celebrities that we did on that, but she was one of them).

We’d already filmed the show, and then I made some new friends, and we had mutual friends, so then I ended up meeting her, which was really weird. I was really scared as to what she’d think, but she loved it, and her parents loved it, it was ace.

What are your ambitions for your career? Where do you want this show to take you?

T: You’d be a nightmare. They’d go ‘Action!’ and you’d throw up all over her.

M: Yeah, forget the Streepmeister. Playing some really dirty, weird, gritty characters that are funny but really sad, that would be nice. Sort of Cohen brothers but a bit weirder. What about you, Tel?

T: I think I’d just like to do Homes Under the Hammer. But jazz it up a bit. Where there’s a dead body in the house.

Very Important People is on Channel 4 later this month.