By Andrea Clarke
AN American spoken word poet has covered U2’s hit Sunday Bloody Sunday as a tribute to the band.
Musician and writer Saul Williams is a longtime fan of the Irish rockers and decided to record the 1983 song, inspired by the events in Derry in 1972. 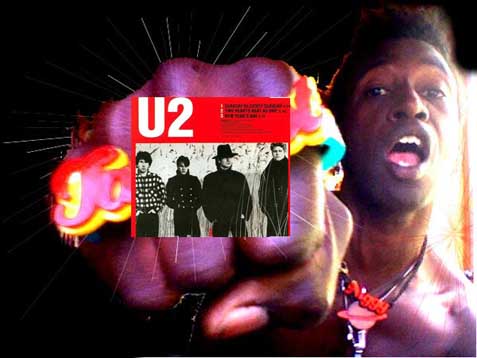 Williams said he felt an affinity with the song and wanted to record his own rendition, co-produced by Nine Inch Nails frontman Trent Reznor, as a tribute to the band.
He told Spinner.com: “This is my favourite U2 song of all time. I first heard it while I was an exchange student to Brazil in my junior year of high school.
“I wasn’t familiar with the massacre in Ireland that the song refers to, but I easily aligned it with my experience as an African-American and recognised it as a revolutionary song”.
Williams also talked of his appreciation of the recently remastered U2 album The Joshua Tree.
“The Joshua Tree album opened my eyes to life beyond hip-hop”, he said.
“I grew up on a very tightly regimented diet of New York hip-hop, and it took a lot for me to appreciate music that wasn’t based on the sort of banging beats my ear was accustomed to”.
myspace.com/saulwilliams