The unstoppable rising star of Irish comedy, Neil Delamere, is kicking off 2008 with a return visit to Vicar Street on Friday March 7th. Neil is back in Vicar St. after the sell out success of his last 10 shows. Donâ€™t miss him this March 7th. With a collection of new material plus some of his best stand up work to date, the Offaly star promises to â€œrock the house with his materialâ€. 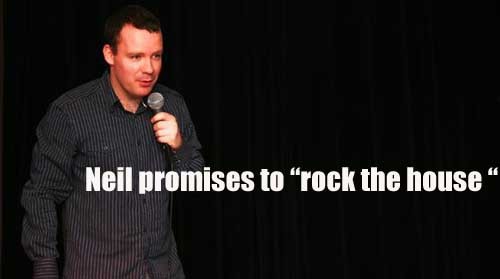 Not only is Neil one of Irelandâ€™s leading stand ups, he has charmed audiences the world over. Neil has performed on five continents, including festivals in Australia and Montreal, sell out performances at The Kilkenny Cat Laughs comedy festival and the Edinburgh Fringe.

Regarded for his television work, Neil kicked off another season of BBCâ€™s topical game show The Blame Game this year, as well as hosting the RTE comedy news show The Panel. With â€œendless top-notch material that had his audience in stitchesâ€ (Adelaide Fringe Festival), Neil presents Montrealâ€™s comedy festival on RTEâ€™s Just for Laughs (RTE2). His his very first DVD â€˜No Messageâ€™ was released in November, attracting rave reviews.

Book your tickets now and be carried along by the â€œinfinite mirth and enjoymentâ€ (Three Weeks) of this â€˜wryly brilliant live performerâ€™ (The Times).