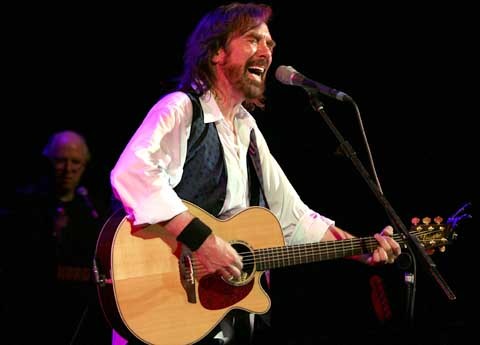 Without reservation, Dennis Locorriere still has one of the finest voices around, impassioned heartbreak and lost innocenceâ€¦and thatâ€™s 22 years after the group he sang for decided to call it a day. And the group? That band who clocked up hit after pop hitâ€¦.the one and only mega-successful DR HOOK. Dennis Locorriere was the VOICE of Dr Hook (but not the one with the eye patch!).

As one of the biggest bands across the world in the seventies and eighties, Dr Hookâ€™s plaudits are impressive. Hook amassed more than 60 gold and platinum records scoring No 1 hits in more than 42 countriesâ€¦ they had massive world-wide success with classics like â€œSylviaâ€™s Motherâ€, â€œWhen Youâ€™re In Love With A Beautiful Womanâ€, â€œA Little Bit Moreâ€ and the original and definitive version of â€œThe Ballad Of Lucy Jordanâ€â€¦ they spent 300 days a year on the road for 15 years. They clocked up another Gold record earlier this year when the Hits & History CD released to accompany Dennisâ€™ massively successful Hits & History tour went Gold with sales over 100,000.

But Dennisâ€™ story is not contained within the Dr Hook story. Heâ€™s appeared in a major movie with Dustin Hoffman. Heâ€™s starred in a universally acclaimed one man play written specially for him, â€œThe Devil And Billy Markhamâ€, at New York Cityâ€™s Lincoln Centre. Heâ€™s written songs that have been recorded by a wide variety of other artists including Bob Dylan, Southside Johnny, Crystal Gayle, BJ Thomas, Olivia Newton-John, Waylon Jennings, Helen Reddy and Willie Nelson.

In 1999, some 15 years after he moved to Nashville and disbanded the group, Dennis secured yet another platinum album for the â€œDr Hook Love Songsâ€ CD. This was accompanied by a major sell-out tour of the UK followed by tours of Europe and Australia.

In 2000 he released his first solo album â€œOut Of The Darkâ€ and won new audiences on another major UK tour also performing several European festivals and touring Australia.

Late in 2001 Dennis played several solo shows recorded for a triple live CD/DVD box set which was released in 2003 and to coincide with his 75 date 2003 / 4 tour a live DVD â€œAlone With Dennis Locorriereâ€ was released. In 2003 he was the runaway success of the Cropredy Festival and in June 2004 he received rave reviews for his appearance on the main stage at Glastonbury festival, where he very successfully followed The English National Opera.

Dennis toured last year to promote the UK release of his second solo studio album â€˜One Of The Lucky Onesâ€™ on Track Records. Response from that tour was so strong that a further tour in the same format has now been arranged for this year.

Never being one who could be bagged or predicted Dennis shone recently among the most celebrated of company when performing as part of the Dear Mr Fantasy Concert at Londonâ€™s Roundhouse where he appeared alongside Steve Winwood, Paul Weller, Pete Townshend, Yusuf Islam, Joe Walsh, Gary Moore, Bill Wyman, Jon Lord and a host of other stars celebrating the life and career of Traffic luminary Jim Capaldi.

This concert was filmed and recorded in HD and will be released as TV programming, a live concert DVD and Audio CD later this year. The Hits & History tour was just the latest instalment of a blossoming solo career with record releases and tours of the USA, Australasia and Europe coming next.

Dennis Locorriere is an artist once seen never forgotten. His massively dynamic shows always encompass his own and Dr Hookâ€™s greatest hits and with the Hits & History live DVD about to hits the charts the timing of this tour could not be better.
dennislocorriere.com

Book online at www.wonderlandpromotions.co.uk / www.ticketmaster.ie
Limited tickets also on sale at the door on the night