Ulterior return this winter to restore the bite of London’s Dark Rock scene with new single Sex War Sex Cars Sex, together with their debut album following in early 2011. 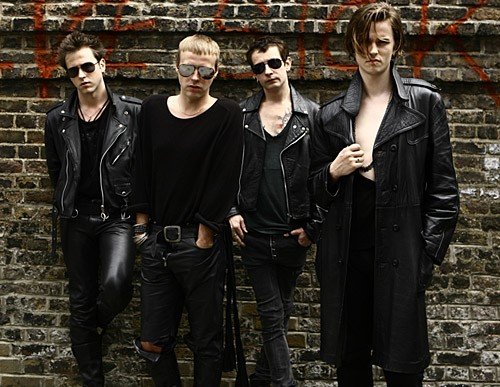 With a hive of activity penned for the coming months, their scheduled ascent is one to follow closely into the new year.

FAME had a chat with the London rockers:

WHO ARE THE BAND MEMBERS AND WHAT DO EACH OF YOU DO IN THE BAND?
Honey Vocals
MCG Synthesizer
Mickey J Ellis Bass Guitar
Simmons Electric Guitar
MK III – Rhythm Box

WHAT KIND OF MUSIC DO YOU MAKE / PLAY?
Rock n Roll

WHERE ARE YOU FROM?
London / Nottingham / Edinburgh / Down the back of the sofa

HOW DID YOU GUYS GET TOGETHER AND WHEN?
Honey and MCG are brothers, and started the idea of Ulterior about 4 years ago. The whole band were already friends at that point so it was simple a case of recruiting the missing members.

WHO ARE YOUR INFLUENCES IN THE MUSIC INDUSTRY?
Naturally, our musical influences are varied… from Rachmaninov to Oasis, The Sex Pistols to The Sisters, however there is a mutual affinity between us all for the music that came from around the late 80s / early 90s.

WHAT HAS BEEN THE HARDEST PART OF BEING IN THE BAND FOR YOU?
The music industry seems to be a bit of a joy-ride at the moment. It seems to only survive because of Beyonce, Jay Z, Lady Gaga and the likes…

Without them there would probably be nothing left. It seems to be in a downfall and things will only get harder for people wanting to make a living out of music. We’ve suffered many obstacles that are due to that over recent years, and itâ€™ll only be harder for others in the future.

TELL US A BIT ABOUT YOUR EARLY DAYS AND HOW THEY DIFFER FROM NOW?
When we first started we were very reactionary and frustrated by the terrible music that surrounded us. I guess that’s how a lot of rock n roll bands form?

Hence a lot of our early shows were very confrontational and ridiculously loud we wanted to get people’s attention by grabbing them by the throat. However, there’s only so far you can go with that sort of live show.

We began to spend more time focusing on the songs themselves. We want to hit as wide an audience as possible. There’s still that primal aggression in the music, except now our range is more dynamic, and more potent. We get more girls at our shows now. 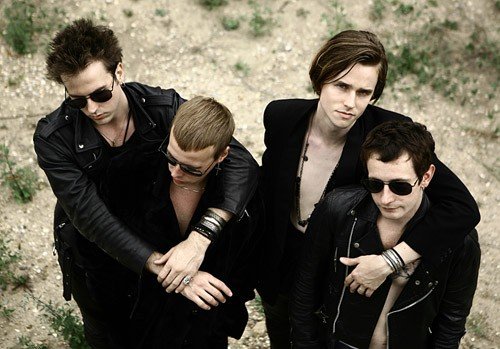 WHAT WAS THE LAST GIG YOU PLAYED, WHAT DID YOU THINK OF IT?
Last show was the up at the Whitby Goth Weekend we had a lot of technical problems but the audience really enjoyed it so we were happy. There was a lot of interesting characters about for the festival. Made our stagewear look pedestrianâ€¦

HAVE YOU ANY FORTHCOMING GIGS IN IRELAND OR NORTHERN IRELAND? IF SO ARE YOU LOOKING FORWARD TO THEM AND WHY?
The scene there seems quite disconnected with the what is happening in the UK in terms of new emerging bands we’ve played Scotland a number of times for example but have never been invited across the water to N.Ireland, which I find strange.

We’ve done Dublin before which was a great gig, despite being chased at one stage by a bunch of rugby playing meat heads in the street!

DO ANY OF THE BAND HAVE ANY IRISH OR NORTHERN IRISH CONNECTIONS ? IF SO TELL US ABOUT THEM?
My (Simmons) family’s from Belfast so I’ve always fancied getting over for a show. My family there probably just think the band is a figment of my imagination! Also, the brothers McGregor have Irish Great-Grand Parents so yes…

WHAT’S THE MOST SUCCESSFUL THING YOU GUYS HAVE DONE TO DATE?
There’s been a lot of different highlights touring around Europe with the Sisters of Mercy, having our name on the cover of the NME, having our music used on a Playstation game.

Every vinyl release we’ve put out has been very important to us too. Playing the Astoria in London before they knocked it to the ground was special for us…

WHO HAS HELPED YOU THE MOST GET TO WHERE YOU ARE TODAY?
As ‘Oprah’ as this sounds, the reality is; each other. Being in a band like this is tough, there’s a real volatile beauty that threads between our relationships and some of the day-to-day things we face as a band, a business, a group of mates and brothers can be rather disconcerting.

Friends and family are key also. Anyone whoever comes to a show or buys a record literally puts food on our plate… they’re important.

WHAT’S COMING NEXT FOR THE BAND?
Our new single ‘SEX WAR SEX CARS SEX’ is out this month with our album following at the start of 2011. Then hopefully we can employ someone to carry our kit for us!

IS IT HARD BEING A NEW BAND IN TODAY’S INDUSTRY?
The current state of the music industry is well documented, but there isn’t any point in moaning. The heights of the 70s, 80s, 90s are over and bands just have to get on with it.

No point in getting upset because half your digital downloads come from illegal free sites that rip you off there’s nothing you can do about it. We just want to be the best rock n roll band we can be. No more, no less…

HOW IMPORTANT IS THE INTERNET AND SOCIAL NETWORK SITES TO THE SUCCESS OF YOUR BAND?
It’s bitter sweet. It helps you get more exposure but also helps expose thousands of those dreadful bands, all trying to get attention. We’ve certainly made good use of it but there’s so many negatives.

On one hand you can be in touch with your fan base but then on the other… Can you imagine Iggy Pop emailing someone who just sent a photo to his inbox? It was never necessary but now it’s all you seem to be doing with your time.

WHO’S THE MESSIEST IN THE BAND?
Honey, without a doubt

WHO IS HARDEST TO LIVE WITH ON TOUR?
We’re all good boys to be honest… Mickey likes his creature comforts, Honey likes his adventures, I like sight seeing and MCG likes sleeping

WHO IS THE JOKER AND WHY?
Mickey J Ellis he’s always in trouble or up to no good

WHO MOANS THE MOST?
Honey “Where’s my fucking Mojito” stuff like that…

WHO IS THE MOST ROCK N ROLL & WHY?
Honey: I’m personally in awe of his unwavering self belief and desire to leave his mark. That’s what it all means to me.

WHO IS THE LOUDEST?
MCG… onstage and off. amped, miked or acoustically

WHO IS THE MOST ANNOYING?
hmmmm… we all share a bit of that one i think

WHAT’S THE MOST EMBARRASSING THING SOMEONE IN THE BAND HAS DONE?
how much time do you have?

WHO WOULD YOU MOST LIKE TO COLLABORATE WITH IN THE INDUSTRY?
David Bowie, Andrew Eldritch, Lou Reed, Primal Scream… the list is endless

WHO WOULD YOU MOST LIKE TO COLLABORATE WITH IN IRELAND OR NORTHERN IRELAND AND WHY?
Super-obvious but an early U2 collab would have beeen incredible…
www.myspace.com/electricityisblood