Amidst claims that CCTV fails to stop crime, one strapped-for-cash unsigned band have found that city centre surveillance is a success and in the process have secured extensive worldwide coverage for their debut video!
Manchester’s The Get Out Clause, hit upon a novel way of producing a video by playing under the watchful eye of the city’s surveillance cameras and then securing the footage under the Freedom of Information Act. With some slick editing, blending onlookerâ€™s mobile phone footage and hand-held camera shots with the CCTV footage, the band now have a truly unique promotional video for their single, Paper. 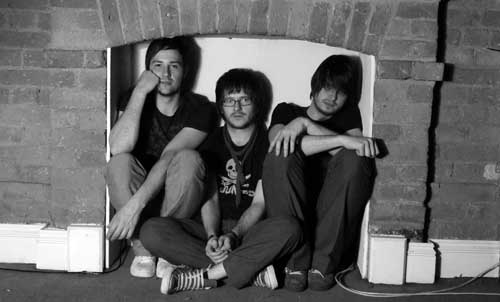 â€œWe wanted to produce something that looked good and that wasn’t too expensive to do,” says guitarist Tony Churnside, 29, who met his fellow band mates at Salford University.”We hit upon the idea of going into Manchester and setting up in front of cameras we knew would be filming and then requesting that footage under the Freedom of Information act.”

The band then wrote letters to the companies owning the cameras asking for their footage – but only managed to get hold of a quarter of the tapes. The results have been cut into a clever video showing the band in 20 different locations. Small shops and firms were the most helpful at handing over the tapes, big firms and corporations proved to be more evasive.

â€œWe had a number of different excuses as to why we weren’t given the footage, like they didn’t have the footage. They delete after a certain amount of time, so if they procrastinate for long enough, they can claim it’s been deleted,” Tony said.

Pick me up, Rip me, Pass me on CD give away â€“ Over the coming weeks The Get Out Clause will be dropping 1000 CDs in central Manchester coffee shops, book shops, bars, hotels and restaurants. They will be encouraging people to take the CD home, copy it onto their computer and in a unique twist, take it back exactly where they got it, and leave it for another unsuspecting passer-by. The Get Out Clause are also welcoming people who copy the CD to register at thegetoutclause.co.uk/ripme/