IRISH rock legends U2 have made a deal with promoters Live Nation that will give them 1.56 million shares in the company, worth around Â£10m. The 12-year deal could see the band earn closer to Â£500m in shared revenue, although frontman Bono will be over 60 before touring finishes.U2 were reported to be signing a Â£50 million deal with the concert promoters back in April. As well as handling the groupâ€™s tours, Live Nation, which also has deals with Madonna, Jay-Z, Nickelback and Shakira, will also look after merchandising, digital and branding rights, and will run their website and fan club. 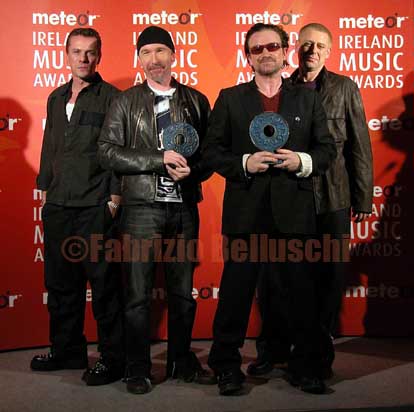 The company first worked with the band in Toronto in 1980 and have been organising their live events since 1997.

Bono said: “We’ve been dating for well over 20 years now. It’s about time we tied the knot.

“We feel we have a great website but we want to make it a lot better. We want a closer, more direct relationship between the band and its audience and Live Nation has pledged to help us with that.â€

Live Nation’s chairman Michael Cohl added: “U2 has created some of the greatest rock music of all time. It has long been our intention to consolidate and extend our relationship.â€

U2, whose last tour was in 2006, will hit the road towards the middle of next year.
By Cathy Black
Photos by Fabrizio Belluschi