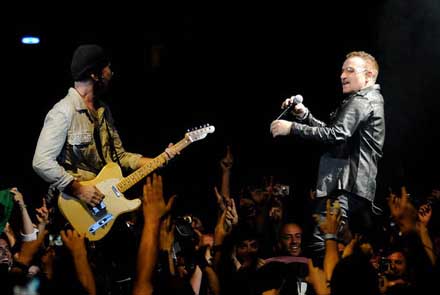 The band opened the show with Breathe, a track from their latest No 1 album No Line On The Horizon and went on to dedicate Angel Of Harlem – originally inspired by Billie Holiday – to the late Michael Jackson.

The 360Â° Tour features a round stage positioned on the stadium floor with the band surrounded by their audience, the natural progression of their previous tours.

By elevating the sound and lighting equipment, the walls that traditionally obscure performers from their audience are removed. This has also allowed greater capacity and a lower general ticket price. 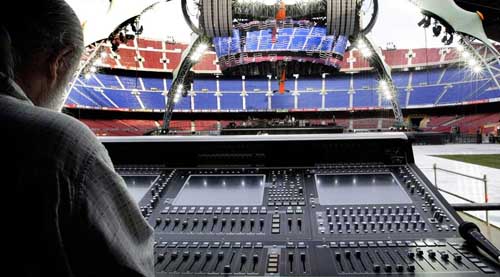 The stage is designed by long-time collaborator Willie Williams and architect Mark Fisher who have worked together with U2 since ZooTv. Advances in technology and digital communication have allowed Williams to create an overhead expandable cylindrical screen made up of 500,000 pixels.

‘The band has been moving further into the crowd with every tour. Tonight they’ve arrived. Willie and Mark have spent five years perfecting this beautiful and extraordinary frame, once the crowd came in tonight, we got lift-off! Said U2 manager Paul McGuinness.

â€œU2 has always put on the most exciting live show. They’ve really raised the bar with this production they want the best for their fans and based on the reaction they have absolutely deliveredâ€ said Arthur Fogel, CEO Global Touring/Chairman – Global Music Live Nation.

The U2 360 Tour will play 15 cities in Europe finishing at Cardiff’s Millennium on 22nd August before heading to North America to perform in an additional 16 cities starting in Chicago September 12th. In 2009, in just 44 shows the tour will perform for over 3 million fans.

U2 360 Tour is produced by Live Nation Global Touring. For complete tour and ticket information visit: www.livenation.com and www.U2.com