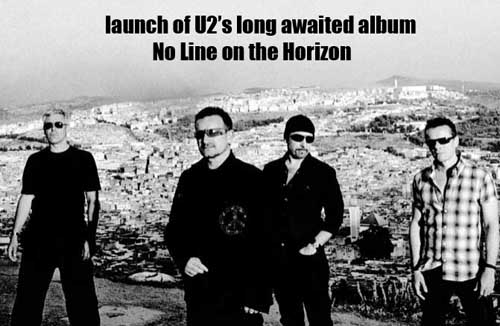 Hard Core U2 Fans have started to queue outside HMV Grafton St for the release of the bandâ€™s new album later this week.HMV is to open its Grafton St and Galway store on midnight Thursday 26th of February for the launch of U2â€™s long awaited album No Line on the Horizon.

The move is in direct response to overwhelming interest from HMV customers in recent weeks. Fans have already started to queue outside HMV Grafton St to ensure that they pick up their copy shortly after the midnight opening
According to HMVâ€™s Gennaro Castaldo â€œWe have had an incredible amount of interest in the new album with a considerable number of pre-orders secured recently. We are responding to demand and are opening our stores in Grafton St and Galway so that fans will have the opportunity to pick up their copy within minutes of its release. All our stores will be fully stocked to cater for the strong demand. We advise fans to come down early to be in with a chance to receive a U2 goody bag.â€

FM Recommends: ANOTHER KNOCK AT THE DOOR (IYEARA Remixes)

BÁLINT DOBOZI: ATLAS Is What Happens When Humility Strikes