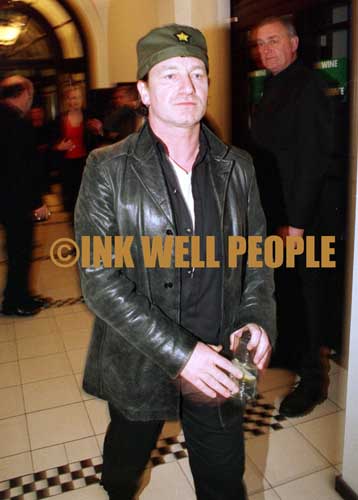 By Andrea Clarke
Photo by Fabrizio Belluschi
A MEXICAN film director has received permission from U2 to use music and footage of the band in his new film – after heâ€™d already shot the movie.
Fernando Kalife decided to go ahead with filming and worry about getting the bandâ€™s approval later.
He said: â€œI kept in the back of my mind what my father always told me: You make a good product, the rest will happen by consequenceâ€.
The film, 7 Dias (7 Days), tells the story of Claudio Caballero, played by Eduardo Arroyuelo, who after losing a $500,000 bet to a moss boss, promises the gangster he will bring the Irish rockers to the town for his U2-obsessed son.
The mob gives him seven days to deliver on his promise.
After using U2 footage and songs in the film, released last month in the USA, Kalife tried to get in touch with bandâ€™s management to get permission before his movie was released.
Shortly after 7 Dias wrapped the director got a surprising phone call from U2 frontman Bono.
Kalife said: â€œMy cellphone rings and the very first thing I hear is an Irish accent, ‘Are you taking it to Cannes (Film Festival)?’
â€œHe was so earnest and so humble that I was just overwhelmed. We talked for about half an hour. He complimented the film a lotâ€.
It turns out the father of Jaime Camil, one of the actors in the film, is an old friend of Bono and they were able to get a copy of the film to the band.
Drummer Larry Mullen was so impressed by the movie he agreed to let the director use the U2 song Miracle Drug and concert footage for free.
Larry said: â€œI just thought, â€˜This is a good guy and heâ€™s got good intentionsâ€.
Kalife, U2 fan himself, couldnâ€™t believe his luck and admires the band for their spirituality.
He added: â€œThey were not afraid they would be cheesy or corny because they were singing about love, peace and God himselfâ€.
The filmmaker is now set to start work on his next project, a romantic comedy about a Mexican man and an Irish woman, provisionally titled St Patrickâ€™s Brigade. And the Irish bandâ€™s influence is still at the forefront of Kalifeâ€™s work. In fact U2â€™s Larry suggested the title for the new movie, as a reference to the renegade Irish soldiers who deserted the US Army and fought for Mexico during their struggle for independence.